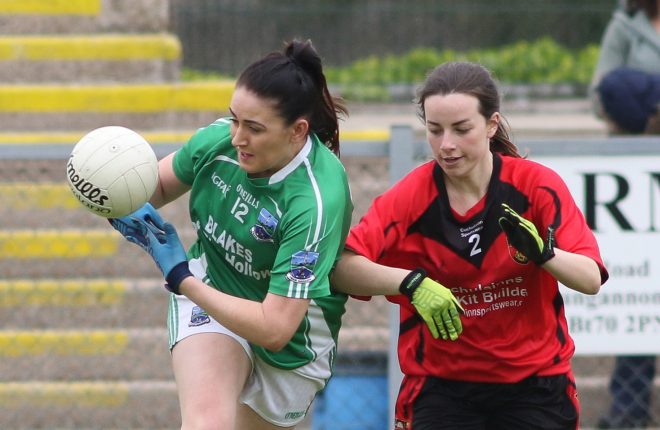 Aileen Moane collects a loose ball ahead of Down defender Alison McCaul.

Despite a six point loss on Saturday afternoon at the hands of Down, Fermanagh ladies senior manager Emmett Curry was still upbeat as he plans ahead now for the All-Ireland intermediate football championship qualifiers.

Putting things into context has been key for the Erne boss and his partner along the sideline Michael Mooney since they took over from Tyrone pair Paddy Fox and Mal Coyle towards the end of the national league campaign.

Curry believes his side have made remarkable progress since that devastating league campaign.

“Look, that same Down team hammered us by about 25 points in the league a few weeks ago, so getting beat by six was I suppose improvement. We could have got something out of that game at Galbally, we tried hard, but we were missing players, Shauna Hamilton broke her ankle recently and we badly missed her in the defence.

“Their wee girl [Lauren] Cunningham caused us bother and I really think if Shauna had have been there that would have been a difference, we have been down to the bare bones with injuries and unavailable players. It’s been frustrating but we have had to work with who we have.”

Curry and Mooney took over the reins eight weeks ago and despite relegation there was a positive response from the players ahead of their first semi-final tussle with Tyrone at the end of May and since then Curry says the players have bought into what they are doing.

“I have to give the players great credit, they have really worked so hard, they could have got something out of that game, it was disappointing for us all”

Fermanagh saw a major changing of the guard over the close season and through the league campaign, but that is old news as far as Curry is concerned.

“We have been down to the bare bones as I said, but it’s all about us rebuilding now. We will be looking forward, it will take a couple of years for us to get back, we have players coming through from under 16 and minors and we will be delighted to bring them through if we get a chance, they are quality players.”

More immediately, Curry hopes to have several players back for the qualifier campaign.

“I know we have lost players, but those girls owed Fermanagh football nothing. It would have been nice if some of those more experienced players had stayed to help the younger girls this year as we rebuild.

The Erne girls now face that qualifier route, unfamiliar territory for them but Curry admits his players will put in a lot of work, hopeful of a good draw.

“All I can say is that I’d like an easier draw, a Limerick or Waterford, a division four side. It would give us a chance to progress, add experience to the set up and help us build, that would be a massive boost for Fermanagh ladies.”

Fermanagh were beaten by an improving Down although the Erne girls put in a hard-working display.

“There was plenty of heart and passion,” said Curry. “We showed we could compete and got a couple of good scores, two late goals too and I’d have to say we could have caused them more trouble though and been tighter at the back, it gives us plenty to work on.”