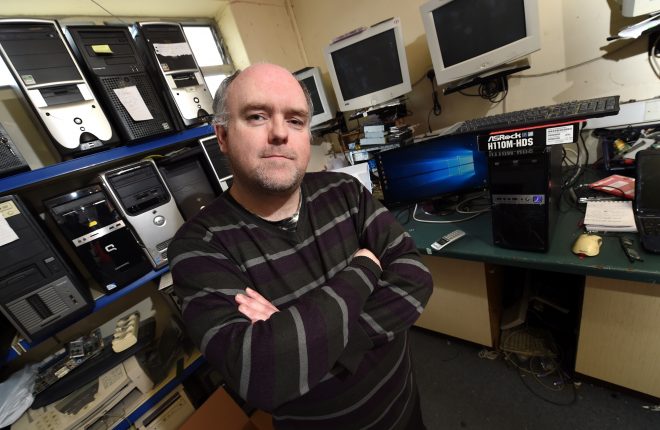 UNSUSPECTING members of the Fermanagh public are being caught out for hundreds of pounds through phone and computer scams.
Police in the area have issued a warning about the scams, which have been rampant in recent times. They have warned such scams are involving, but their aim remains the same.
“We have seen different examples of scams over the last few months,” said a PSNI spokesperson. “In some instances criminals will claim to be from a computer company and try to gain access to your home PC or laptop so that they can access your financial and personal details.
“In other scams criminals claim you are entitled to money and can access it by transferring a specified amount of cash to them. Or some criminals will try to persuade you that they are from a government department or official organisation and that you owe money and need to pay this as soon as possible.
“Their efforts to entice money are imaginative and varied and the public need to be vigilant and alert at all times.”
One local woman, Martina Breen, who was caught out last week, has warned people of how easily it is to be fooled. Thankfully, Mrs Breen realised what was happening before the scammers could take any money from her or damage her computer, but she said the experience was “scary.”
Explaining how she had been having trouble with her passwords and had sought out a Yahoo helpline online, Mrs Breen said at first the scammers, who she spoke to on the phone, seemed to be there to help.
“When they looked at my computer they said I’d been hacked,” she said. “They were looking for extra details from me. When they mentioned a cost I realised, and said I wanted to go away and think about it. As I soon as I mentioned I wanted to go they slammed down the phone, very quickly.
“Something like that really makes you think. It’s scary, especially when you remember how much is done online these days.”
Computer expert James Lawn, of Erne Computers, said Mrs Breen’s story was sadly not unusual.
“It’s a big problem, across the board,” he said. “A lot of people are getting caught out for hundreds of ounds a time. These scammers, who ring to say they are there to help, are laying it in such away it seems genuine.
“Microsoft and other computer companies never ring anyone. The number one rule is, if anyone calls you from a computer company just say no and hang up straight away.”
Mr Lawn said older people were especially vulnerable to scammers, due to their trusting nature, with some local pensioners being conned out of on hundreds of pounds. Young people get caught out too, though, with one Fermanagh teenager being caught out for £700 when paying their university fees on what they thought was a genuine website. Thankfully, the teen managed to get their money back through her bank.