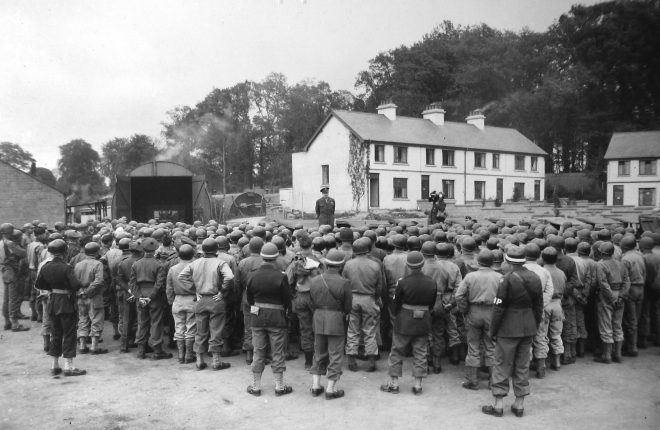 President Eisenhower pictured during his visit to Enniskillen during WWII

The US Consul General to Northern Ireland is making an historic visit to Fermanagh today (Wednesday) to mark the county’s vital role in World War Two.
Daniel Lawton will be in Enniskillen exactly 72 years since General Eisenhower, the Supreme Commander of Allied Forces inspected and addressed American troops at Celtic Park before travelling to Portora Playing Fields for a Regimental Review.
Mr Lawton will unveil a commemorative granite plinth at the Model School, adjacent to Celtic Park, one of over 20 important American land, air and lough bases dotted across Fermanagh.
The Model School plinth marks the enormous significance of General Ike’s visit, and of Fermanagh’s role as a vital American out-post prior to D-Day on June 6th 1944.
Vintage American WWII jeeps will be on display from the Wartime Living History Association with soldiers dressed in WWII American army uniform. Mr Lawton will meet former WWII U.S. soldier Teddy Dixon and Bill Eames, a former pupil at the Model School who joined the RAF, trained in America and towed gliders into Normandy on D-Day.
Mr Lawton’s trip will begin at the Graan Monastery where he will be welcomed by Fr Brian D’Arcy. They’ll reflect on the tragedy of the seven U.S. aircrew who died when their Flying Fortress aircraft, The Galley Uncle, crashed on 9 December 1943. Five other crew members survived due to the bravery of the Monks who heroically rescued them from the burning aircraft. Grateful U.S. soldiers contributed £250 for the erection of a white marble statue in Our Lady’s Bower at the Graan. Mr Lawton will lay flowers at the memorial, which now bears the names of all the crew members of The Galley Uncle.
Mr Lawton will be guest of honour at a special lunch hosted by The Rotary Club of Enniskillen at the Killyhevlin Hotel, attended by local business, community and church representatives. This is Enniskillen Rotary Club’s 60th anniversary year – General Eisenhower was a Rotarian, and the founder of Rotary International, Paul Harris, was from the United States.
After lunch Mr Lawton will be given a guided tour of St Macartin’s Cathedral and St Michael’s Church by Monsignor Peter O’Reilly and Dean Kenneth Hall.

The visit has been organised by Selwyn Johnston, curator of Headhunters Railway Museum and Roger Edmondson whose father was a US soldier stationed at camp Celtic Park in 1944.