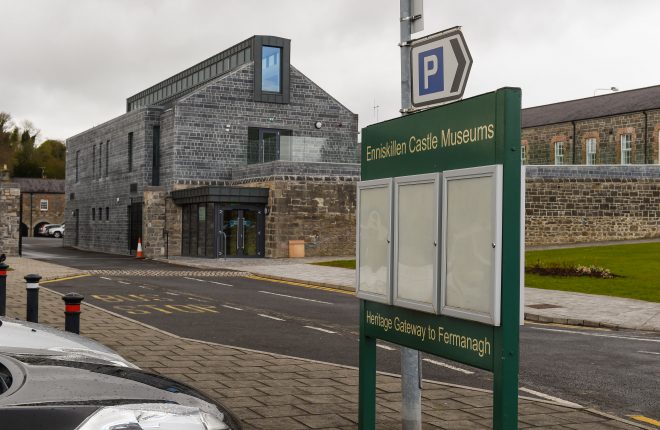 AFTER more than 35 years on Wellington Road the Enniskillen Visitors Information Centre is to move this summer.
However, questions have been raised as to whether the move to the new upgraded Fermanagh County Museum base at Enniskillen Castle later this summer is the right one for the busy centre, which is currently located directly opposite the entrance to the bus station, the main transport hub in the town.
Manager of the centre, which was first opened on Wellington Road in 1980, Charlotte Wilson said she believed the centre was moving in the right direction.
“I think it’s a brilliant idea,” she said, referring to the new base at the castle, where it will share the site with the County Museum and the Inniskillings Museum. “There will now be one central ‘welcome’ hub for visitors to the town.
“We already work very closely with the museum anyway, now we’ll all be in the one building and we will be able to share the provision of services. It’s both a challenge and an opportunity, but we’re really looking forward to it.”
Ms Wilson, who has been working at the centre for 29 years, added the move would benefit both visitors and local businesses alike, with the upgraded museum building also providing additional space that they could use for tourism training for local businesses and stakeholders.
“The presentation of information for visitors is also very important,” she continued. “Its all about making it accessible. We will have a rolling screen outside, and there will be Internet access and interactive screens at the centre too.”
Explaining the new location will be well sign-posted from the bus station, Ms Wilson added that the new site would also be an improvement for tourists seeking their roots, with the genealogy services remaining at the visitors centre, and the museum also providing genealogy resources.
With work still continuing on the museum upgrade work at the castle, which is now at the furnishing stages, Ms Wilson said they were hoping to be moved into the new premises by Monday August 1.
“Visitor services will be continue to be delivered right up until the last minute,” she said. “We’ll be closing here one night, and opening there the next morning.”
Finally, Ms Wilson said the museum opening hours would be extended following the upgrade, opening all day on Saturdays. With regard the Visitors Information Centre’s, which is now Monday-Friday 9.30am-5pm and Saturdays and Sundays 11am-5pm, from June to September, Ms Wilson said they had decided on the opening hours based on research, including studying those of other tourist centres.
“They can be tweaked if need be, though, based on customer demand,” she added.