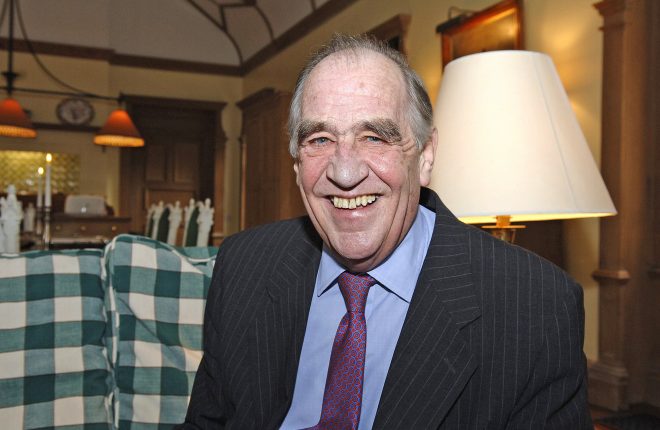 The late Lord Erne, pictured at home at Crom gkfh23

ALMOST five months after his passing, people in Fermanagh bade farewell to Henry Crichton, the sixth Earl of Erne, at a public memorial service this week.
Hundreds attended a service of thanksgiving at St. Macartin’s Cathedral in Enniskillen on Monday afternoon which his son John, the seventh Earl of Erne, had said would be “very much a service for the people of Fermanagh”.
Among those joining family members and friends to remember him were The Duke of Kent, representing Queen Elizabeth, and broadcasters Sean Rafferty and Gloria Hunniford, who read ‘A Lough Erne Perspective’ by Seamus Heaney.
Born in 1937, Lord Erne inherited Crom Castle on the shores of the Upper Lough Erne aged two, after his father was killed in the Second World War. He moved to the 1,900-acre estate near Newtownbutler when he turned 21, where he and his first wife Camilla later brought up their five children. As the financial pressures of running the estate mounted over the years, in 1987 he gave much of the land and historic outbuildings to the National Trust and Crom Estate was opened to the public.
The late Earl was involved in numerous local and national charities, including the Red Cross, the Share Centre at Lisnaskea and the Royal British Legion.
A passionate fisherman and landscape painter, he had successful exhibitions in London, Dublin and Fermanagh. He also wrote a children’s book, Freddy Long Ears. In 2013, Crom became the setting for Blandings, the BBC’s adaptation of the PG Wodehouse stories, starring Jennifer Saunders and Timothy Spall. 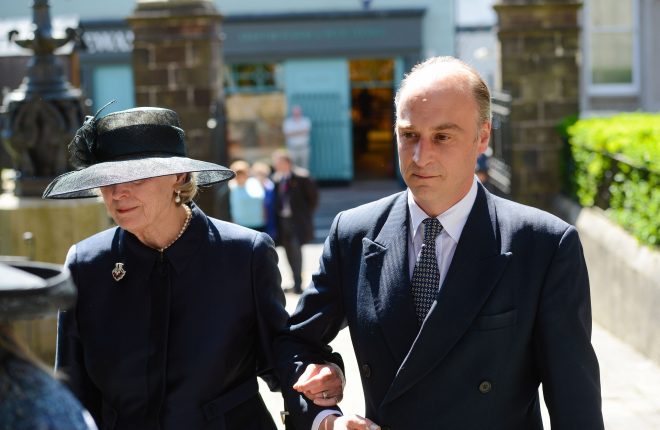 The former Earl of Erne’s widow and his son John make their way into St Macartin’s Cathedral, Enniskillen on Monday afternoon RMG87

Advertisement
Known to his family and friends as Harry Erne, he passed away on December 23rd last, aged 78. His deep commitment to Fermanagh and its people was acknowledged by his friend The Duke of Abercorn who led the tributes to him at Monday’s service.
“In Fermanagh, Harry performed his role with great effect, through generating a sense of stability which was of the utmost importance and treating everyone with the same respect. He always supported with enthusiasm all cross-community ventures.”
For 25 years, Lord Erne was the Queen’s representative in Co Fermanagh before retiring as Lord Lieutenant in 2012. His first official engagement had been the annual Remembrance ceremony in Enniskillen on November 8 1987 when the IRA bomb exploded. In the immediate aftermath of the bombing, he went straight to the Erne Hospital to visit the victims and attended the funerals of those who had lost their lives, giving support to their relations.
“Harry proved time and again his ability to carry out these requirements with great effect. However, the Remembrance Sunday bomb was a terrible blow to his sensitivity. At times, he would almost despair at the sheer horror of the suffering of so many, yet he found the strength to continue to carry out his role with his normal dignity, bringing great comfort to the families of the victims and the injured,” the Duke told the congregation. He also pointed out that “during the dark decades of the 1970s and 80s” both Harry and his second wife Anna, “never abandoned either Crom Castle or its people”.