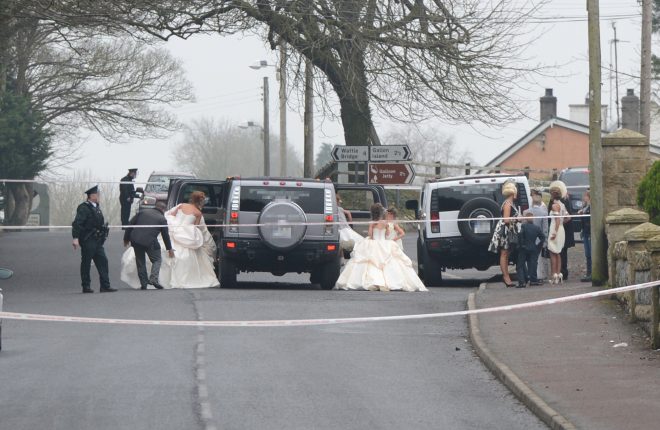 A JUDGE has requested senior prosecution officials here to make direct contact with their counterparts in the Republic to progress the trial of two men accused of the Newtownbutler wedding murder.
Patrick McGinley, 47, of Lisfarrell, Edgesworthstown, Co Longford and his son William, 27, of the same address are charged with murdering Patrick’s uncle, 63-year-old Bernard McGinley, who was attending a wedding Newtownbutler on February 11, 2015. Delays in the investigation into the case mean a court has yet to decide if there is enough evidence against the pair for them to be sent forward for trial.
Previously, the large number of witnesses to be interviewed, vehicles to be examined and CCTV to be viewed had resulted in delays progressing in the case.
However Enniskillen Magistrates Court heard on Monday that the only current obstacle in moving it forward is the delay in receiving evidence seized by authorities in the South.
The PSNI are awaiting a firearm from gardai which was recovered in the Republic, in order to compare test fired cartridge recovered at the murder scene.
A decision to prosecute cannot be taken by the Director of Public Prosecutions (DPP) until the cartridge is tested against the weapon.
This has been referred to “as the last piece of the jigsaw” by District Judge Nigel Broderick.
Defence barrister Seamus Leonard said examination of the gun was crucial to the case.
“My clients are very keen to see the matter progress,” he added.
Judge Broderick echoed this view and said that direct action, apart from sending letters as has already been done, would be required.
“The victim’s family want to see a trial. Someone at a senior level in the prosecution needs to make contact with the DPP in the South to progress the matter and ascertain if they intend to release the exhibit and if so when. Unless there is direct contact with the parties, letters will not get the priority they deserve,” he said.
Noting that the matter first came to court over a year ago, the judge said the prosecution should also highlight the impact the delay is having on both the families of the defendants and victims.