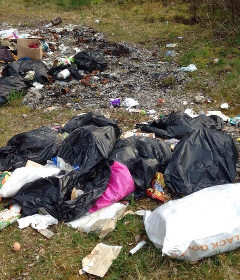 THERE is growing anger and frustration in Roslea as the Spring Grove Forest has once again become a dumping ground.
Locals say items including a sofa, television, washing machine and numerous random bags of rubbish are being dumped inside the gates of the forest by night-time fly-tippers.
Valerie Boyle, who lives in the forestry, says the issue on the Clough Road site has been ongoing for some time but has escalated in the past week.
“I believe that because we are too near the border, people are simply coming across to dump their rubbish. They wouldn’t get away with this in their own jursidiction where they would be named and shamed but it seems to be a very different story on this side of the border.
“The gate to this beautiful forest is always wide open and there are no signs to deter people from illegal dumping. I don’t see why there couldn’t be cameras put up for a week to catch these people.
“We have seen and heard cars coming into the area and people randomly diposing of their rubbish at nightime. One man was seen recently coming out of the trees and hopping straight back into his car. He was too quick to be caught but it was a southern registered car that sped off in the direction of Clones,” Valerie added.
“It’s also at the point now where I can’t even leave my own bin out at night because I know it won’t be there in the morning. Mine and those of my neighbours have been stolen in the past or filled with other people’s rubbish.”
Valerie says she has highlighted this issue to the Forestry Service on a number of occasions but nothing has been done to remove this unsightly rubbish from the forest.
“We have rang the Forestry Service many times and nobody has got back to us. The council have been very good at coming out to clean up the mess on occasions. Ultimately it seems that nobody cares about the forest becoming a dumping ground. It’s a total disgrace that nothing is being done by the authorities to stamp this out for good.”
There has been a history of illegal dumping along this stretch of road, including one occasion where an articulated trailer of waste was abandoned there. In another incident up to 70 tyres were dumped along a 500-yard stretch. A caravan was also burnt out in the forest last year.
A spokesman for Fermanagh and Omagh District Council told the Herald: “The Council is aware of an ongoing issue of illegal dumping at Forest Service property, Spring Grove in Roslea. While the Council has no authority regarding the control of illegal dumping on Forest Service property or on private lands, the Council continues to liaise with stakeholder agencies including the Forest Service and the Northern Ireland Environment Agency to tackle the issue of illegal dumping in the district.”
Local Sinn Fein councillor Brian McCaffrey says the quiet rural country road is a prime target since it runs parallel along the border with Co Monaghan. He also called for the introduction of CCTV monitoring in the area.
“This is an ongoing problem and if this upsurge continues I think that the council will need to revisit the issue of installing cameras in the area.”
Regards,