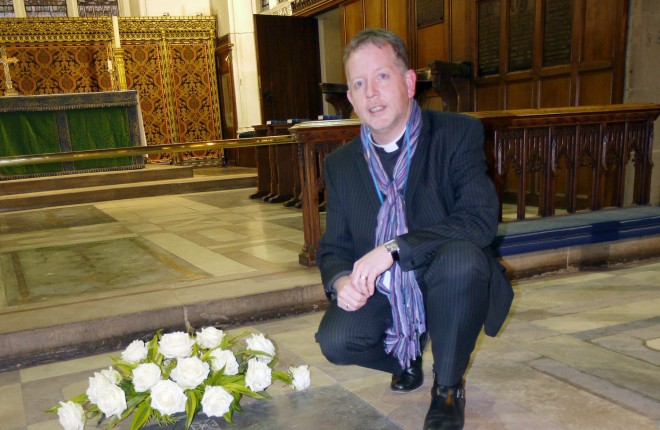 AS Leicester City celebrates Premier League title triumph, the Fermanagh-born Dean of the city’s cathedral says the win has “lifted everyone’s spirits”.
The team completed one of the most remarkable triumphs in sporting history by winning this year’s title. The club’s first top-flight championship in their 132-year history was sealed following Tottenham’s 2-2 draw with Chelsea on Monday night, leaving them with a seven-point lead at the top of the table with two games left to play.
Irvinestown man David Monteith is Dean of Leicester and told the Fermanagh Herald yesterday (Tuesday) that it has been a fantastic achievement for the underdogs team.
“Unlike so much football today, it hasn’t been quite so shaped by finances and more focused on the game itself and the importance of team work. For those people who have been following the team for upwards of 60 years and have never known anything like this, it’s an extraordinary moment.”
“We have the Leicester Foxes flag flying from the cathedral’s flagpole and the statue of King Richard III is even holding a bottle of champagne. There’s a real sense of everyone just sharing the joy of this event.
Leicester will receive the trophy following their final home game of the season against Everton on Saturday evening.
David said: “I’ll be at the match and so will be praying hard for a great win because that would be a wonderful conclusion. Of course as the trophy arrives in the city, no doubt the whole community will party for days to come. We look forward then to the next season, particularly as many more European clubs and fans come to Leiscester and discover just what a great place it is.”
David is a son of Molly and Mallvern, who live in Irvinestown. His father was manager of Kilskeery Harps, who played in the Fermanagh and Western League.
“My dad ran community football and I remember many cold and wet days at a touchline when I was a little boy,” he recalls.
David has been working in Leicester for seven years, and had previous stints in London, at Wimbledon and the landmark St Martin’s in the Fields Church in Trafalgar Square. He attended Irvinestown Primary School, before moving on to Portora Royal School.
He rarely gets much time to visit Fermanagh but his proud family will be travelling over to visit him in July when he is awarded an honorary doctorate by the University of Leiscester.
It has been quite a year for the local man who oversaw the reburial of King Richard III at the city’s cathedral but he wouldn’t be drawn on whether this alone has inspired the Foxes to Premier League title glory.