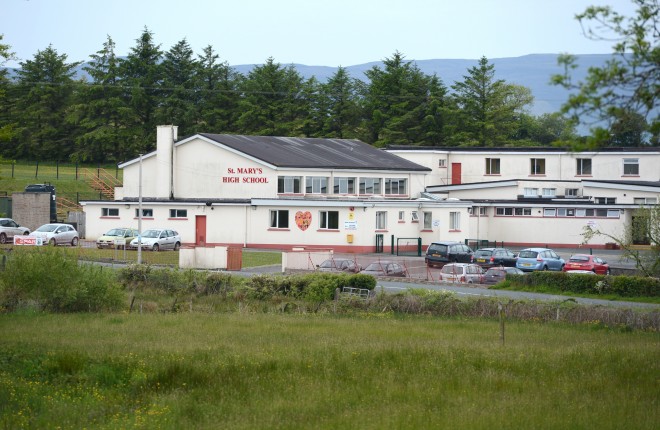 THE PRINCIPAL of what is soon to be the smallest  secondary school in Fermanagh has questioned the rationale for mergers in light of their recent academic success.
Michael Quigley has been the principal at St Mary’s High School, Brollagh since September and despite having just 97 pupils they ranked 10th out of all secondary schools in the North in terms of GCSE results. Mr Quigley believes this is proof that bigger is not always better as the top two schools, St Eugene’s College, Roslea – currrently the smallest secondary in the county – and St Comhghall’s College, Lisnaskea look set to amalgamate.
“Three of the top 10 are small, rural, non-selective so at least that question should be put there. At least a voice given.”
He continued: “If you go by stats and stats alone it is a contradiction really to what they’re stating is the best form of education, because at St Mary’s it’s local, it’s rural, it’s non-selective. It goes against big is best, really there has to be a place for our type of education. We’ve had community support and it plays such a big part. Our nearest school is 25 miles away, why would you send a child from here into Enniskillen if you’re getting a top 10 education in Northern Ireland?”
Mr Quigley stopped short of endorsing any amalgamation of secondary schools in Fermanagh stating that it has be to the benefit of the local community.
“It has to be specific to the local community because really what you would prefer is if all children go to their local school and there is the quality of education. So if there is a merger in an area where it suits those local pupils that would be appropriate, but I don’t think a merge for the sake of merger is the solution.”
St Mary’s Brollagh has previously been the subject of closure proposals and Mr Quigley has commended all those at the school who have helped deliver sterling examination results. In finishing 10th  68.6% of GCSE students achieved five of more A* to C grades including English and Maths.
“We have outdone ourselves. It is the hard work of the children, their parents and the effort that the teachers have put in. For being out on our own and the challenges that brings along with budgetary constraints I think we’re doing fantastic.”
Despite having less than a hundred pupils the future looks bright at St Mary’s with an intake of 20 Year 8 pupils in September set to galvanise numbers.
“We really have that benefit that you don’t have in a big school, the relationships are fantastic between the pupils, teachers and parents and there is a real sense of camaraderie,” the principal added.