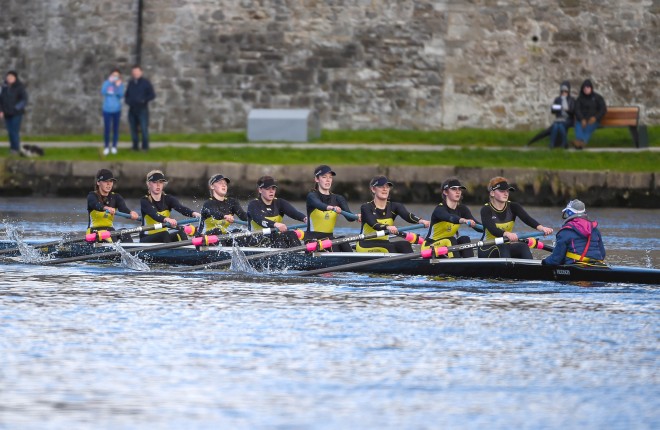 The 59th Erne Head of the River took place on Saturday past, as Trinity College, Dublin stormed to their second successive headship and Portora Boat Club dominated the junior ranks.

First down the course for Portora was their junior men’s eight. Coming in off the back of a successful Lagan Head the week before the crew were keen to test their speed against the country’s top eights ahead of the School’s Head of the River in London on the 17th March. The crew came over the line in eighth position overall and over a minute ahead of the second placed crew in their category from Commercial.

The Erne Head of the River provided the women’s junior eight the opportunity to test themselves over a 6,000m long course which will be similar in length to what they will encounter in London next week. The girls finished the day as the third fastest women’s crew on their way to winning their category. However, they were pushed hard by the crew from Methody.

There were also wins for Portora’s men’s junior 16 eight, who more than doubled their margin of victory over the second place crew, also from Methody, in the space of a week. They finished a massive minute and ten seconds ahead, while the newly formed men’s senior quad continued their winning ways.

The day was not without drama, as the young women’s junior 16 B eight claimed victory over their A counterparts, who were held up for three minutes due to a collision with a crew from Portadown. This is a promising group of girls who have their eyes firmly fixed on the newly introduced junior 15 eights at the Irish Championships in July.

In the men’s senior eight, Trinity College Dublin claimed the spoils over their rivals for the second successive year. Sitting in the bow of their boat and first across the line on the day was Old Portoran Alex McElroy who is enjoying a successful season with the Dublin University.