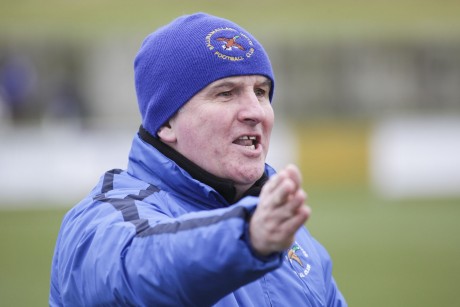 They may only have escaped the foot of the table in the past week after being rooted there for much of the season, but Carrick Rangers have proved something of a nemesis for Ballinamallard this season.

Twice they have come to Ferney Park and twice they have left with the full complement of points. It was 1-3 to Rangers in September and 1-2 in December. It would be fair to say United owe Carrick a modicum of payback after those smarting defeats, but Anderson has a different take on things.

“It’s nothing to do with revenge or owing anybody, the reality is we’ve got to focus on getting the points from the game. That’s all I’m interested in. Certainly we lost two games at home which were very disappointing performances,” said the Mallards boss.

“We need to play better than we did in those two matches, but I’m confident that the players have their heads screwed on for the game ahead and that we can go up their and get a result.”

Ballinamallard’s struggles with the Taylors Avenue outfit are perplexing, given the disparity in quality between the sides. Anderson believes a lot of their problems have been of their own making.

“You could put it down to two bad games. In the last game we scored an own goal at the start and in the previous game we gave away two sloppy goals, we gave the ball away at the back. We’ve just got to cut out those mistakes and not give them a foothold in the game.

“The reality is we’re coming to the end of the season and the players know the importance of this and there’ll be a different mentality going into this game.”

One positive is that Carrick always give up goal chances, having only kept two clean sheets all season. On previous form, shutting Rangers out at the other end will go a long way to getting the visitors the points here.

“There’s no doubt about that,” said Anderson. “I’m confident that if we keep a clean sheet we’ll win the game. But we have to make sure we keep ourselves in the game, especially away from home because they’ll come out all guns blazing.

“It’s about our 11 players winning their individual battles. That’s what it’s going to be about on Saturday, it’ll be about grinding out a result from start to finish. If we put in a good performance I’m sure the result will look after itself.”

Of course, it’s a very different Ballinamallard team to those Carrick were doing battle with in 2015. The Ferney boss hopes that altered dynamic will help tilt the tie in his side’s favour.

“We’ve brought in the likes of Ivan Sproule and Stephen O’Flynn and obviously that experience and quality will bring a different dimension to how we’re going to play against them. We’ve lost Alvin Rouse for three weeks, but Stefan [McCusker] did exceptionally well in the last game against Glentoran and I’m confident in this squad of players and that we can get the result that we want.

“This is a very important game, there’s no shying away from that. These are the games we have to get results in. It’s not the Linfields and Crusaders that will keep Ballinamallard in the Premiership League, it’s the games against the teams in around us and we haven’t done well in that respect. We have to change that on Saturday and the rest of season. It has to start this week against Carrick.”

Not helping Anderson’s pre-match preparations were doubts over the venue for Saturday. A pitch inspection on Tuesday morning was to decide if the game would be played at Taylors Avenue or Solitude and the Mallards manager had some sharp words on the matter.

“It’s not an ideal situation by any stretch of the imagination. I think the Carrick Rangers pitch situation is a fiasco and should have been dealt with long ago by the authorities.  But I don’t want to say too much about the pitch, I’d rather concentrate on the game.”

The importance of the clash is emphasised by the potential impact it could have on the table with the Ducks capable of ranking anywhere between bottom and eighth come 5pm Saturday.

“It’s very tight to call,” said Anderson. “If you take a look at the bottom five the table could be turned upside down this weekend or it could stay the same. The only thing we can control this Saturday is our own game, we can’t control anything else, so all I want the players to focus on is us playing Carrick. I don’t want them thinking about anything else. We get the result, everything else will take care of itself.”