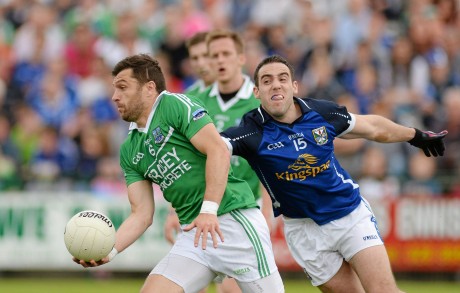 Ryan McCluskey makes his return as Fermanagh travel to Galway this Sunday.

Pete McGrath has made four changes to his starting 15 to face Galway in Sunday’s NFL Division 2 clash in Tuam.

The Fermanagh boss has made a minor defensive change, this sees the impressive Paddy Reihill making way for the fit-again Ryan McCluskey.

McGrath has opted for more major surgery further up the pitch though. Damian Kelly comes in instead of Richard O’Callaghan in midfield. Meanwhile up front Paul and Declan McCusker are ousted in favour of Ryan Lyons and Sean Quigley.

While the inclusion of Quigley and Kelly mightn’t raise many eyebrows, the start for Lyons will come as a surprise. The Erne Gaels has seen no game time this year, and his three appearances in 2015 saw him accumulate just 63 minutes on the pitch.

Lyons combative style and the return of Quigley suggests that Pete McGrath plans to take the game to Galway as the Erne men chase two desperately needed points for division 2 survival.