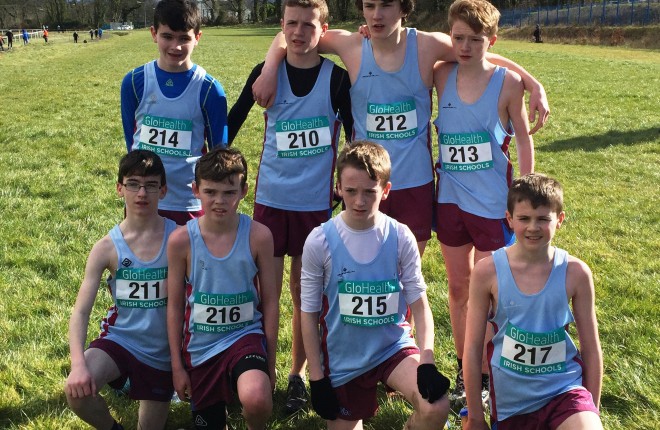 On an day when Ulster schools found the going tough, only four of the 24 available sets of team medals came north, and only a handful of individual medals.

This bronze, a tenth Irish medal in all for St Michael’s since they won their first in the junior age group a decade ago, was some reward for a season which was overall quite successful, but where these finals highlighted, yet again, the growing gap between those areas with strong established junior athletic clubs and those without.

The St Michael’s team minus Oisin Cassidy packed well with Conor Murphy leading them home just ahead of the fast finishing Oliver Hughes Jordan with first year Cormac McCauley, an undoubted contender for athlete of the season and Dara McKenna completing the four scorers.

Dylan Corrigan, Dylan Martin, Andrew Browne and Joseph Boyle completed the team who finished third behind the dominant school overall on the day, Rice College Westport and Coláiste Eoin from Dublin, who had pipped them at the DCU event eight weeks ago.

St Michael’s seniors as expected found the jump in standards a step too far after their Ulster success, having to settle for fourth in a very high quality race dominated by St Aiden’s CBS and St Flannan’s Ennis. Domhnall Lynam was first scorer ahead of Jack Scallon, Jacob Britton and James Boyle who stepped up from the Intermediate ranks.

Conor McNally, Bruce Worley, Oisin Morris and Conor McCaffrey completed the squad who could not get ahead of St Kieran’s, Kilkenny, who had the individual silver medallist in Peter Lynch, in the battle for bronze.

The reality for this squad is that, in spite of them all being available in 2017, the gold and silver medal winning schools are essentially Clonliffe Harriers and Ennis Track Club and they will again dominate this age group next season when St Mary’s Mullingar (Mullingar Harriers) and Rice College (Westport AC) will also be exceptionally strong.

St Michael’s Junior (u15) team did not run anywhere near as well as they did at the Ulster finals and finished 7th in a race won by St Colman’s Newry, Ulster’s only gold medal of the day. That was the Newry college’s eighth Irish title in a decade. With several staff actively involved in cross-country and eight national titles in a decade it looks as if the famous Violet Hill football nursery will soon be better known for is running than it’s exploits on the GAA field.

For St Michael’s, who had done well to take silver at the provincial finals, Keelan Farry, Joe McDade and James Cox were the three leading finishers ahead of Sean Murray, Ben Corrigan, Dara McGandy, Pierce McGovern and Adam McGovern. Two years ago in the Ulster schools u13 age group St Michael’s took gold by a huge margin of 55 points, St Colman’s hadn’t made it out of their district, how things can change in a short period.

In the senior girls Edel Monaghan representing Mount Lourdes had a good run in 16th place, fourth Ulster finisher, continuing what has been a season of excellent progress for the Irvinestown girl who runs for Enniskillen Running Club.

The Irish schools cross-country finals are increasingly dominated by club athletes whose main or sole focus by intermediate level is distance running. Even the traditional powerhouses like St Malachy’s, who actually have an athletic club based around the school, struggle to make an impact on the national stage.

The chances that St Michael’s will ever again win Irish team gold or have an athlete take an individual medal or even a top ten finish again, are slim to nil. The structures of underage sport have changed and in the years to come it will only be schools who have the chance to link with a strong juvenile athletics club on the doorstep who will experience success at national level and in this respect the Republic of Ireland is way ahead of the north, helped also by a much more unified, less cumbersome and less frequent examination system.

Medals like the bronze won by the minor boys on Saturday and the nine previous sets of medals won by athletes representing St Michael’s at these championships may soon become much rarer metal.