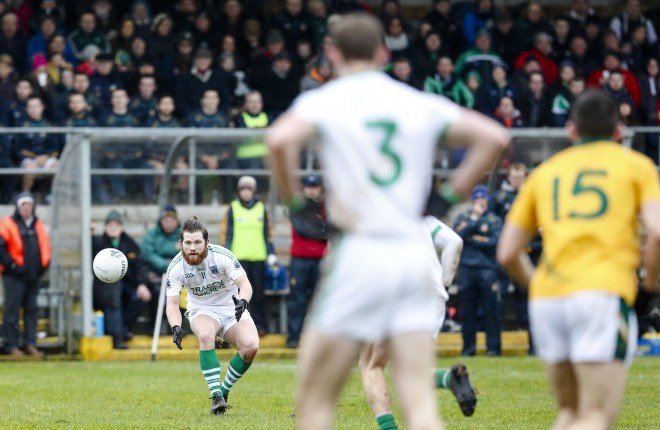 One man pleased to put in a solid 74 minutes of football was a Ciaran Flaherty.

In the absence of Declan and Paul McCusker there was perhaps something of an onus on this likes of himself and Barry Mulrone to up the intensity. The Belcoo man delivered that in spades and he was delighted to see the fruits of that in two precious league points.

“I suppose I’m getting a right run of games compared to last year, so that’s good to see and I’m hoping it continues,” sadi Flaherty. I’m glad that after last week I was able to last a whole game and put in a decent enough performance with the team to get the win, so that was a positive.”

The hosts were helped on their way by an inexplicable bit of horseplay by Meath midfielder Andrew Tormey. He got the line with a black card for a third man tackle, effectively handing the impetus to the Ernesiders midway through the second half.

“He was a bit rash in what he did,” said Flaherty. “After his first tackle on Ruairí [Corrigan] his head should have been a bit more screwed on. The extra man helped us a lot. They just kicked ball straight down our throats in the second half and that helped us build a head of steam and get on the front foot attacking wise and get those scores we really needed.

“In the first five, ten minutes of the second half they went toe to toe with us and it probably took us a while to come to terms with that. But once we got a handle on that I thought we were pretty comfortable in what we were doing and it showed when we were knocking over the points towards the end.”

Fermanagh defended their extended victorious run in Brewster into the bargain. Flaherty says keeping that particular run going will be vital as the league nears its decisive stages.

“We made it a point that we don’t lose anything in Brewster. That’s what’s drilled into us before we go out playing at home. With the crowds we’re getting this year and last year it’s added incentive to keep winning at Brewster and keep that momentum going. I suppose with the division that we’re in, winning all our home games is going to be absolutely vital to stay in it be competitive.”

Now it is the second trip in successive season to Armagh for a Saturday night league fixture. Flaherty knows it’s going to be no place for shrinking violets and he is already pumped for the challenge.

“I think we have to go Armagh and believe we can turn them over. We know from last year in the Athletic Grounds that they really got a head of steam up against us in the first half and we were lucky to get out of there with a point. We just battled hard in the second half and came away with something.

“They might be at a low point at the minute, but they have a lot of pride and McGeeney will have them up for it against Fermanagh. He’ll be painting it as a battle between the two promoted sides and it’ll be tough. We’ll be taking nothing for granted down in Armagh because there’s a lot at stake for both of us,” said the Fermanagh wing forward.