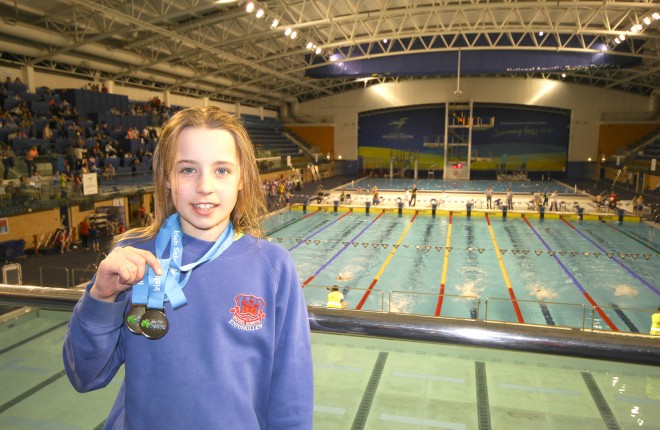 Ellie McCartney with the two golds she collected at the Irish Minor Schools Championships.

Ellie McCartney represented the Enniskillen Model Primary School for the second year running. The 10-year-old had qualified from the Swim Ulster gala with golds in both her events, the 100m individual medley (IM) and 50m breaststroke. For the Irish championships Ellie was seeded 3rd and 1st respectively in her events.

The IM required all the positive aspects of each individual stroke to be moulded together to succeed. Ellie has remained unbeaten since 2014 over 50m, 100m and 200m breaststroke events in her age group and sometimes above, but it was going to take a lot more than a new PB to reach the top spot.

‘EllieFish’ loves a challenge and was a close third after butterfly, she crept into second during the backstroke and a fantastic tumble turn saw her lead as she began the breaststroke. Ellie pulled away during her favourite stoke and held on in the freestyle to win gold with a four second PB of 1:17.80.

The P7 student easily qualified for the 50m breaststroke in a time of 38.23 and was top seed for the final where her friend and fellow competitor, Jodie, pushed her all the ways for the girls to finish with an Ulster one, two. This was the second year in a row that Ellie won gold in the 50m breaststroke and she was close to add the 100m IM title as well becoming a Irish double gold winning swimmer.

St Mary’s PS, Maguiresbridge pupil, Jake Cadden, enjoyed the taste of success on Sunday and was proud of putting his school on the Irish Schools swimming map for the first time. Jake produced an outstanding performance in the 11-year-old 50m backstroke to make the final where he was placed 8th overall in the Irish Schools Competition. Jake also had a fantastic result in the 50m breaststroke when he placed 12th overall with a new PB.

Devenish College were represented at the Irish Schools for the first time by Tara McKenzie. The 1st year student swam in the same heat as Ellie and she posted a fantastic PB of 42.92, just missing out on a final placing by 0.9 of a second. New to competitive swimming, finishing 14th in Ireland will give Tara the confidence to improve over the coming months.

Ben Lynch swam for the 1st time at the championships representing St Michael’s, Enniskillen and recorded a PB in the 100m IM with time of 1:22.13 to finish 8th in Ireland. Ben also competed in the 50m backstroke.