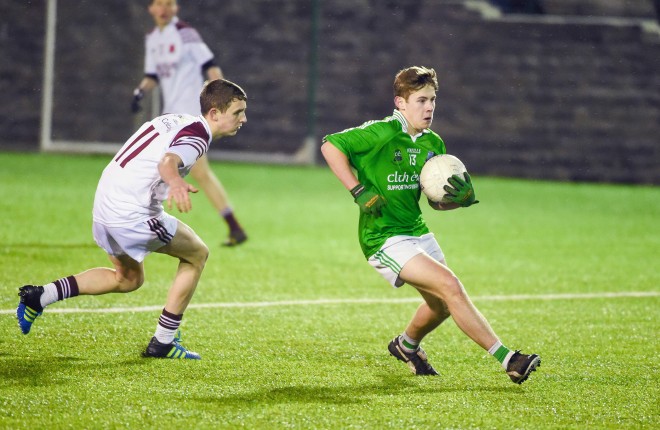 Fermanagh Schools delivered a fine display to secure their place in the Markey Cup final as they produced a fluent second half performance to overcome Donegal’s St Columba’s at the Bawnacre on Friday evening.

This contest was well fought out all the way through, very little separating two well matched sides at any stage of an entertaining 60 minutes.

The Donegal visitors held a slender one point interval advantage, but they fell behind shortly on the restart as Fermanagh resumed with purpose and a trio of quick points lifted the Erne boys into a lead which they were never to surrender.

But at no stage could the leaders claim to be assured and with a just a couple of minutes remaining they had seen their lead trimmed down to a single point.

However they shot some excellent scores from play over the second half and wrapped up the victory with two more of top notch calibre, Paul Óg O’Reilly and Jason Flanagan firing over the late clinching scores.

Fourteen points for Fermanagh schools and what was impressive was that all but three of these came from open play many of them from distance. Yet this was not an entirely faultless display.

Over the opening half they had been guilty of a number of wides and on occasion their distribution was indifferent.

Nevertheless this was on the whole an admirable team performance, a number of players looking very sharp indeed and there could be no question about the merit of the team win.

Lots of confidence in the side and there was no shortage of players more than comfortable on the ball.

Full forward Jason Flanagan lead the scoring stakes with five well struck points to his personal tally while further back in the line-out centre back Enda Cassidy and midfielder Barry Morris both contributed handsomely to a top notch win.

Flanagan set out his stall immediately with his first score of the evening, but for the next 15 minutes it was St Columba’s who looked the brisker side and they eased themselves into a lead which they were to hold for the greater bulk of the opening half.

Corner forward Paul McGuinness, nephew of senior manager Jim McGuinness was posing considerable difficulty and he, along with midfielder Ciaran Gallagher and Jack Flannery began to collect scores for the team.

They might well have pinched a goal also but Fermanagh keeper Thomas Óg McGurn made an excellent stop and indeed pulled off another crucial save in the second half.

Fermanagh answered with sporadic points from, Ryan Morris and Conor McGann but they were also wasteful.

However five minutes from the break a Cameron McBrien shot levelled the sides at five each, but St Columba’s edged the interval scoreboard with two scores from Simon Breslin and Ciaran Gallagher, sandwiched between those being Fermanagh’s final score of the half, Paul Óg Reilly on the mark.

From the changeover onwards it was Fermanagh who gradually got a firmer grip on matters and they enjoyed a profitable spell in the third quarter which had them pushing out into the lead.

They picked off a series of top class points from play, Ryan Morris, Jason Flanagan, Conor McGann and Paul Óg Reilly all on the board and heading into the final quarter a three point gap had been established.

But they were not totally dominant and St Columba’s were always in the hunt.

The Donegal side introduced two physically powerful substitutes, Nathan Byrne and Stefan Boyle and they made an impact around the middle third.

Points from Simon Breslin, wing half Danny Walsh and finally two successful frees from Boyle narrowed the deficit to just a single point with several minutes still on the clock.

Fermanagh were able to respond to the challenge and they again eased the situation with pinpoint precision from Reilly and Flanagan to restore the three point cushion.

The leaders had some late defending to do as St Columba’s pressed hard for an equalising goal and the Donegal side almost snatched it with a fisted effort from an incoming cross just fisted wide of the upright.

A close run thing for the winners but overall a well deserved victory for a side who played with pace and purpose and who will look ahead to the decider with optimism.