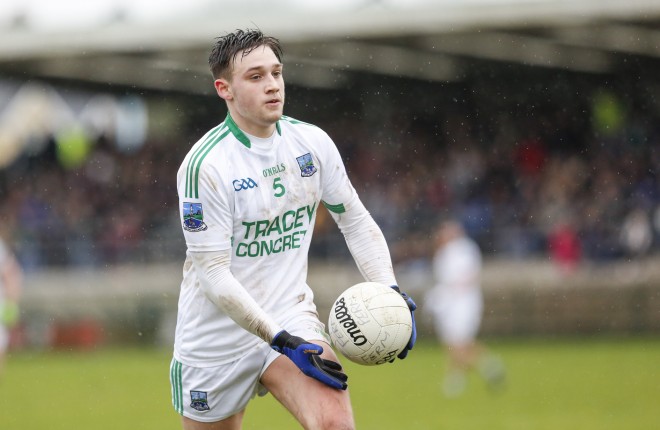 Paddy Reihill benefitted from Pete McGrath’s oversight of the under 21s.

The first two points are on the board after a hard fought win against Meath in tough conditions.

That now brings Fermanagh’s unbeaten record at home to ten games which can’t be underestimated with some of the teams that have visited Brewster park over those ten games. Hopefully come the game against Antrim that record will be intact and with that a huge psychological advantage over the visitors.

What was most satisfying about the win was that the team has been able to take the significant blows of some of the senior players missing.

Every county team has to contest with injuries or players needing rested, even more so nowadays with the huge physical demands on players, it is inevitable that players will pick up injuries.

With a county the size of Fermanagh it is tougher to have that strength and depth in the team to fill the gaps left by these injuries.

What has helped Fermanagh this year is the link up with the under 21s, with Pete McGrath being involved and Simon Bradley, an eye can be kept on any emerging talent. I am lead to believe that training is sometimes mixed up with the seniors and under 21s training together.

This is great for the under 21 players in terms of gaining experience, but also giving them a chance to shine, which a few players have managed, as Pete has blooded a few this year already. As I had said before it also keeps the senior boys on their toes and keeps them pushing on which in the end can only lead to a players bettering themselves.

As part of my New Year wishes I had mentioned getting some type of structure into the underage levels and even with it only been a few months old in terms of structure the benefits are already been seen. Let’s hope it also has a positive bearing on the under 21’s results in a few short weeks time.

It will be daunting every time the team looks to the next fixture, as every game is huge in division two.

I have no doubt the players won’t be hiding in their shells as the games come, plenty of them will be relishing the competitiveness of the games and the opportunity to test themselves against the bigger counties, and with the game against Armagh on live TV the players should be excited by the challenge and extra coverage that come with been in the top tier.

Regardless of the end result of the league, the competitive nature of the games and the experience gained could not be better in terms of preparation for the summer.

Galway, Laois and Meath will no doubt hate having to play so many Ulster teams, but it will be interesting come the summer, will such competitive football stand to them. Come the championship the Fermanagh players will not be in shock when they enter the heat of an Ulster championship game.

Over the next few weeks they will be going toe to toe with plenty of Ulster teams in tough conditions, they will feel like they came through a two month long battle, but they will be well prepared for the war with Antrim.