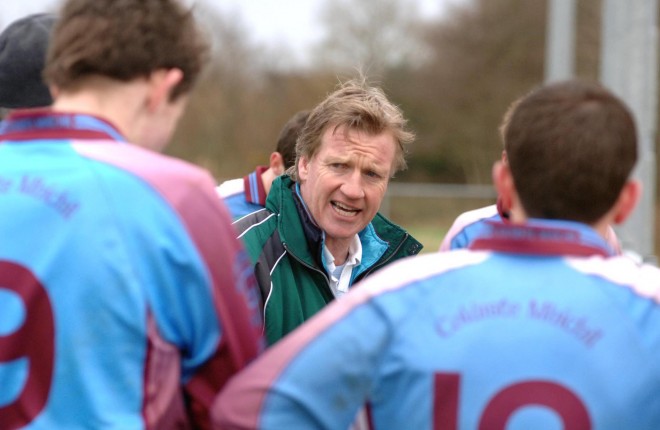 Booking the automatic spot in the MacRory cup quarter-finals has it’s advantages and disadvantages.

It does mean that you approach your last eight game with a certain lack of competitive football. However it does mean you can get the opportunity to size up you potential opponents.

St Michael’s MacRory cup boss, Dom Corrigan, made full use of that chance when he watched St Paul’s, Bessbrook edge past St Patrick’s, Armagh in the MacRory cup quarter-final qualifier.

“They were hugely impressive because Armagh were no bad side,” said Corrigan. “They had beaten us in the league stages of the competition. So we knew Armagh would put a real challenge down to them.

“When Armagh went six points up it took a very good side to turn that around. It was a ten point turnaround in the last ten to 15 minutes.

“I suppose the big thing about them is they’ve great pace throughout their team. In their forward line they have Liam Kerr at corner forward from Burren, he’s a very good player as are Josh Durnin and Ryan McSherry. They’re all players blessed with pace and good footballing skills. They’re really going to test out our defence, there’s no question about that.

“The other big thing about them is the leadership of Jarlath Óg Burns in the middle of the field, particularly the last night against Armagh. It was critical to Bessbrook getting over the line. When he was needed most he delivered and that’s the mark of a very good player.”

St Paul’s strength in the middle third is a particular concern for St Michael’s now, with their talismanic midfielder Michael Óg McGarrigle sustaining a nasty ankle injury in a challenge against Summerhill of Sligo. Corrigan knows finding a different way of skinning that particular cat is going to be a real tactical challenge for the Enniskillen college.

“There’ll have to be a something of a rethink in tactics because Michael Óg McGarrigle was lined up to do the job on Jarlath Óg Burns,” said the St Michael’s boss. “We’ll have to go back to the drawing board again, back to the training pitch and see who the replacement is for Michael Óg to go on Jarlath Óg. We don’t have a replacement of Michael Óg’s quality, so we’re just going to have to look at that closely.

“I was hugely impressed with their two half back Ryan Gaskin, the number six who drove forward and got the goal, the crucial goal and probably the turning point of the game when they were six down. Then they have Conor Clarke who is a colleges All-star, he was very impressive as well. They have good quality all over the pitch, are blessed with their pace and that’s something we have to look at as to how we’ll counteract that.

“Bessbrook are a very good side and have been this past couple of years. They’ve been knocking on the door and will probably be disappointed that they didn’t win a MacRory in 2013. Last year they had a very good side again and were disappointed against Dungannon. They’ll be looking to push on into another semi-final this year.”

St Michael’s will be looking to Lorcan McStravick, Belcoo full forward Matthew McAloon and attackers James Garrity and Eoghan Curran to deliver the lion’s share of the scores, but Corrigan is conscious that his side haven’t exactly been free-flowing when it comes to getting the score board ticking over this term.

“It’s an area of our game where we have got to be more clinical with our shots because whatever opportunities we get against Bessbrook will be crucial. They are a fairly free scoring team and have scored a lot of goals in the competition, so we definitely have to step up and our forwards really have to nail a big performance on Sunday.”

The game sees MacRory Cup football coming to Clones, but Corrigan believes playing the in home of Ulster finals won’t faze his players one bit.