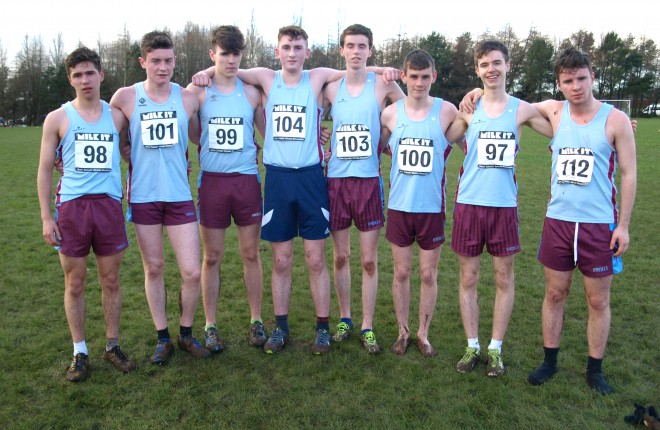 A decade after they won their first ever Ulster schools cross-country title, in what was then the minor age group, St Michael’s College brought the curtain down on ten years of excellent progress, as they captured their 15th provincial crown, with a dominant display by a very youthful team to take the Enniskillen school’s second senior boys title, their only previous success in the blue riband event being in 2010.

St Michael’s also took three sets of silver medals in the mini, minor and junior age groups and comfortably saw off the challenge of St Malachy’s to retain the title of top overall school in the province, but there was a sense that at least one or possibly two of those silver medals could have been turned into gold and made Wednesday a truly historic day for the Blue Vests.

There was however a little bit of Ulster schools cross-country history for the senior squad as they became the first team to win all five Ulster schools trophies having taken the redesignated mini title in 2011, the new minor title in 2012, junior gold in 2013 when they added the Irish title and then winning the most demanding age group, the intermediate 12 months ago.

However, showing the ever changing nature of team sport, only Domhnall Lynam and Bruce Worley have the complete set of five different gold medals as many of the other members of Wednesday’s winning eight missed at least one of the earlier title triumphs for a variety of reasons.

On Wednesday the Blue Vests controlled the team battle from the start as they had four or five athletes in the top 20 from early in the 6,500m race which saw a mixture of energy sapping muddy stretches and flat firm going in excellent weather around the exposed Mallusk playing fields.

Jack Scallon was always on the back of the lead pack of nine or ten athletes with Jacob Britton and Domhnall Lynam a few places further back and Conor McNally and Bruce Worley, who was to loose both spikes as the race progressed, contesting the finals scoring slot just inside the top 20. As the race progressed it was Lynam who came through to lead the team home in 9th with Scallon holding on well for his best race of the season in 13th followed closely by Britton in 15th and the fast finishing McNally in 18th ahead of the shoeless Worley.

Conal Boylan, Oisin Morris and Conor McCaffrey completed the gold medal winning team and they will hope to contest the bronze medal at the All-Ireland finals as the two heavy weights St Aidan’s and St Flannan’s slog out for gold and silver with St Mary’s Mullingar and Rice College Westport likely to be the other main protagonists.

The most pleasing of the three sets of silver medals won on Wednesday was undoubtedly that taken in the junior category behind a dominant St Colman’s Newry. This St Michael’s team had won the mini boys title in 2014 and last year, just after the tragic death of team member Oisin McGrath, they were edged into fourth and missed the All-Ireland finals.

Having finished second to last year’s Ulster champions and All-Ireland bronze medallists Omagh CBS at the districts a week earlier they produced their best run since DCU in early January, lead by the ever improving Keelan Farry who was followed by the equally improved Sean Murray, Joe McDade and Ben Corrigan.

The squad was completed by Pierce McGovern, Dara McGandy and Adam McGovern. All this group have been committed to their running all season and deserve their first trip to the All-Ireland finals in a few weeks.

If the junior silver was a big positive then that won by the minor team was somewhat disappointing, as they never really got going, and the team expected to challenge them, Our Lady and St Patrick’s College Knock, who are all members of Lagan Valley AC, took their first ever Ulster schools boys cross-country title.

It was just one of those days for the St Michael’s lads as even Oisin Cassidy who has had a positive season so far was a little off key in 9th with Conor Murphy too never really getting into his stride finishing 20th while Oliver Hughes-Jordan and Dylan Corrigan both recovered well after poor starts to complete the scoring quartet.

Garbhan McGovern, Rhys Campbell, Finn Treacy and Andrew Browne were the other members of the winning squad and, with a few weeks to work on things and the possible addition of a few of the stronger u13 athletes, an All-Ireland medal is not by any means impossible, but it will take a much stronger opening kilometre if they are to be in the medal mix.

All season it looked as if the mini boys title would be between St Colman’s Newry and St Michael’s, who had won the title in 2014 and 2015, with the Newry side looking fractionally stronger prior to Wednesday’s provincial schools, and so it proved on the day with little between the two well matched teams.

Cormac McCauley has run very well all season and was aggressive from the start, eventually finishing sixth. He was followed by Diarmaid King who, despite an injury interrupted season ran solidly in 14th, with Dylan Martin and Eoin McKervey the other two scorers. Ethan Prunty, James Wallace, Justin McDade and Ruairi Moore were the other members of what has been an excellent group all season and there is real potential for them to build on this if all the main athletes are fit and healthy for a full season.

While St Michael’s did not medal at intermediate level, finishing 4th, this squad has been very competitive and made good progress all season and with half the squad eligible next year, they can, if given the opportunity, go on to push for a podium place and for those in their final year at intermediate level compete for places on the senior squad. James Boyle lead the squad home at Mallusk followed by Sean Vaugh, Matt Nelson, Rory Baird, Aidan McDonnell, Tyler McKenna, David Flynn and Mark Monaghan.

A second senior boys title, having missed out on good opportunities in 2013 and 2014 in particular, and retention of the overall top school trophy is certainly cause for satisfaction, but overall there was a feeling that even more gold could have been secured at the 2016 Ulster finals, as St Michael’s now look towards the national finals on Sligo Race course on March 5th.