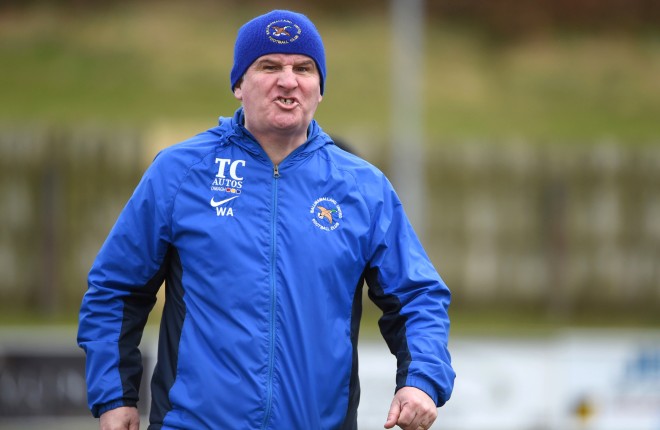 Despite not having played last weekend, it has been a profitable few days for Ballinamallard.

Defeats for Dungannon (6-0) and Carrick (1-5) over the weekend kept them below the Mallards in the table and eroded both their games in hand tally and score difference numbers.

Ballinamallard will be hoping to capitalise on that this Friday night when they travel to Warrenpoint.

Although Stephen O’Flynn, Ivan Sproule, Shane McCabe, Chrissy Crilly and James McKenna are all carrying slight knocks Ferney boss Whitey Anderson hopes to be picking from a full deck for the trip to Milltown.

Anderson will be particularly keen to get O’Flynn out on the pitch against the Point as he bids for a valuable three points.

“Stephen only got 45 minutes last week, but you could see in that period the influence he had on the team with his hold-up play and general professional approach. He’s been a breath of fresh air,” said the Mallards boss.

“Ivan Sproule got man of the match. He’s 34, but his energy was a great lesson for any young fella watching the game to realise that it isn’t just about what you do on the ball. What you do off it is more important.

“The new faces have certainly added a lot, but there’s a lot of experience through the spine of the team with Alvin [Rouse], Emmett Friars and Shane McCabe. Those are all experienced players and we need to have them on the pitch for the rest of the season.”

Warrenpoint’s last six games have seen them record two wins, three draws and a defeat. Anderson saluted the turnaround wrought by Barry Gray, but maintains that Ballinamallard’s focus has to be on themselves and faith in the ability to go out and do a job.

“Warrenpoint have turned a bit of a corner and are on a great run themselves,” said Anderson. “But it’s all about ourselves. We’re going up with the attitude we want to win the game. It’s certainly a game we don’t want to lose, but if we put in the same level of performance commitment we did against Ballymena then I’m confident that we can get a result, but we’re going to have to work from start to finish.

“Not only have Warrenpoint signed a couple of good players, but they are a very fit footballing side as well. It’s going to be tough, but the players have been working hard towards that over this past couple of weeks.

“They’ve had a bad defensive record for a long time, but in this last few games they’ve conceded very few goals in fairness to them. That isn’t just down to they defence, it’s the whole team. If the team’s attacking that takes pressure off the defence.”

The fact that it’s a long trip on a Friday night won’t be a factor for the Fermanagh men believes Anderson.

“The journey doesn’t worry or concern Ballinamallard Football Club one bit. We’ve been doing at all levels for years now across the country, so it doesn’t cost our players a thought.

“I’m confident we’ll score goals up there. We’ll be working extremely hard, doing the basics right, getting our shape right, keeping our discipline. I think the first 15, 20 minutes will be hectic and there’ll be no quarter given by either side. It’s two sides battling it out at the bottom of the table and I think that’ll make for a good encounter this Friday.”

Anderson also rejects any great fears about late goal concessions, and maintains the visitors focus will be on getting ahead of the Point early and forcing them to do the chasing.

“Players on the pitch have to keep their concentration from the first minute to the 90th. You can’t switch off in this game and we switched off again against Ballymena at conceded at the end of the game. But the reality is you can’t afford to switch off. The players will know that in the last 10, 15 minutes of the game that if they have a result under their belt that pure adrenaline will keep you going and that’s not something I’m worried about on Friday night. I’m confident that if we get our noses in front that we’ll get a result.”