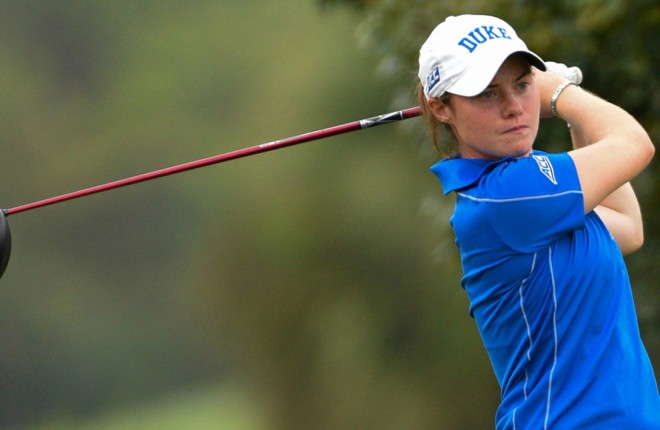 There are a lot of sports people who look to have bright futures at a young age, but who struggle to deliver on that promise as the challenges of adulthood and elite sport kick in.

That is only natural given how punishing and unforgiving sport is at the very highest level. It takes a rare degree of self-possession, focus and desire to push on into elite sport. Even then nothing is guaranteed.

One of those rare athletes is Leona Maguire. Along with sister Lisa, she has been in our consciousness for years already as a rising star of golf. Indeed, when you consider the roll call of her achievements in 2015 it is hard to credit that she is still just 21.

Back in May she clinched the World number one spot, a feat which earned her the Mark H McCormack Medal. She was also awarded the 2015 ANNIKA Award and European Golf Association Gold Medal. Later in the year she finished second in a professional event, the ISPS Handa Ladies European Masters and went on to represent Great Britain and Ireland at the Vagliano Trophy Matches at Malone Golf Club. Then in December she capped her season by scooping the Irish Independent Young Sports Star of the Year Award.

Currently studying and playing with Duke University in Durham, North Carolina, the Fermanagh Herald caught up Maguire after a whirlwind 2015.

“This has truly been a wonderful year for me both at a home and abroad,” said Maguire. “Never in my wildest dream would I have thought that I would have achieved so much from a golfing perspective. Both Lisa and I settled in to college life in Duke University very quickly and we have both benefited tremendously from the practice facilities there, the opportunity to tee it up in competitions alongside the best amateur lady golfers in the world and the opportunity to play in wonderful golfing weather.”

It might be easy to be blasé when the accolades are coming so thick and fast, but Maguire has a deep appreciation of each hard won step in her golfing progression.

“I am very proud of my achievements in the past year. To reach world amateur number one was an amazing milestone and then to receive the ANNIKA Award and The Mark McCormack Medal were really the icing on the cake. I have always been very proud to represent my country playing in the Curtis Cup and The Vagliano Trophy on many occasions.”

You can never stand still in sport though, and Maguire is already mapping out her goals for 2016. The positive talk of the future speaks of a golfer who is really enjoying her game, relishing the opportunity to fully explore her capabilities and keen to discover how far they can take her.

“Coming second in the European Masters in Buckinghamshire in June 2015 was a wonderful confidence booster for me so playing in more Pro events in 2016 season is definitely a goal. I am on track at the moment to qualify for the Irish Olympic Ladies Golf Team to compete in Rio. This would be a dream come through, to get the opportunity to compete and represent Ireland and get the chance to win an Olympic Medal.

“This year I hope to qualify once more to represent The Great Britain and Ireland team in The Curtis Cup. It should be very special this year as it is being played in Ireland in Dun Laoghaire Golf Club just south of Dublin. It would be fantastic to win on home soil. That is definitely a goal for 2016.

“I felt my golf game was is in a good place last year and I feel confident and comfortable with my game as I start the 2016 playing season in California next month.”

Studying and playing on the other side of the Atlantic has helped bring both Maguire sisters bring their game on in leaps and bounds. However, there are times when even the most focused of athletes can miss home comforts.

“Of course I miss home, but modern technology is wonderful,” said Maguire. “Both Lisa and I get to keep in touch with everything that is going on at home. We probably miss our younger brother Odhran most. He is 14 now and he plays off a handicap of one. He is well able to come out and play a good round of golf with us now when we are home.

“We miss Mum’s cooking and Dad’s good golfing advice each time we went out to compete. But they are always at the other end of the phone if we need opinions on the important things.”