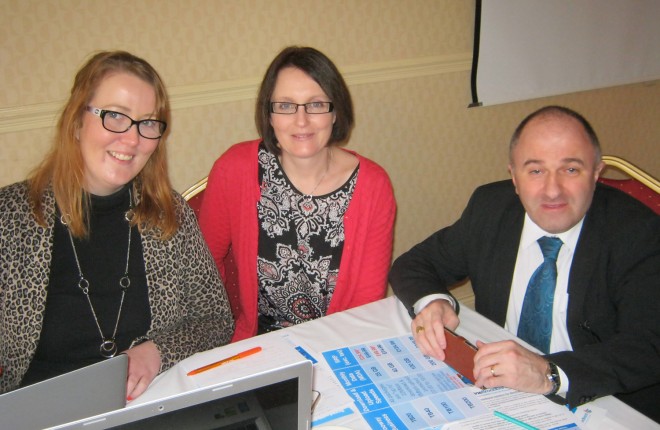 Jennifer Young, Catherine Ross and Cllr Victor Warrington at the satellite broadband open day at the Donn Carragh on Monday.

Fermanagh’s economy is suffering due to a lack of broadband services, and its not just rural or isolated locations that are losing out.
On Monday business owners and householders from across the county descended on the Donn Carragh Hotel in Lisnaskea for a satellite broadband information day. The event, which allowed people to test the speed of the service, was organised by local MP Tom Elliott after the Government announced a Satellite Broadband Support Scheme, which will cover the cost of installing the service for those getting less than 2MG download speeds.
Advertisement
The location for the event was appropriate as, despite being Fermanagh’s second largest town, Lisnaskea has only patchy broadband coverage, leaving numerous business premises empty and many existing businesses struggling to get connected.
Cllr Richie McPhillips, who himself runs a business in the town, explained that some businesses on the Main Street could connect to the junction box at Silverhill, while neighbouring businesses couldn’t.
“It’s a sort of idiotic situation,” he said, explaining he knew of around eight properties on the Main Street that were likely vacant due to the poor connection. “Broadband is an essential tool for any business, and everyone is now looking at all the options they can possibly get.”
Mr Elliot said there had been a “mixed” reaction from those attending Monday’s event, which he had organised in conjunction with satellite providers Avonline.
“Some people think it will suit them, because they’ve nothing at the moment or are paying for a service they’re not getting, while others think it’s a bit costly,” he said. “It’s not going to be for everyone, but some people it will suit.”
Mr Elliot was referring to the higher cost of satellite broadband compared to traditional cable connections, particularly regarding data usage. At Monday’s open day those who’d had the chance to test out the service said they would consider the higher costs simply to access any sort of service.
Gerry McGrath, for example, said he found the event informative, but would have to consider signing up due to the costs, which start at £29.95 for 10GB a month.
Advertisement
“I live between Belcoo and Garrison and we’ve no BT broadband at all,” he said. “We’ve absolutely no service as we’re too far from the exchange, apparently. Satellite broadband sounds like a great technology. It’s just a bit costly.”
Joe McCarron, from Lisbellaw, said he was only getting a download speed of just 0.2MG, but he wasn’t sure about the cost of the satellite service at home, while Mary Brady said she would consider it as she was only getting speeds of 3MG in Lisnaskea and was paying over £60 per month with BT.
Business owners were even more keen, however. Katie McLaughlin from Greentown Environmental in Florencecourt said with their current service it took them between 20 minutes and half-an-hour to upload a tender document.
“We’re not too bad with download speeds, out biggest problem is uploading,” she said. “If we can get this upload speed quicker we would consider it. It is more expensive than BT, but you’ll be paying for something quicker.”