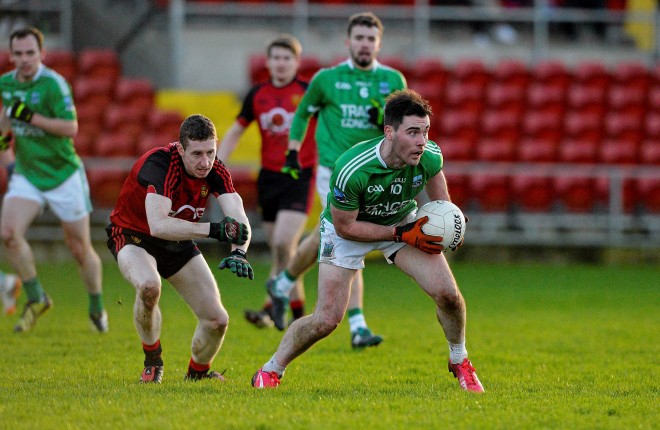 Longford manager, Denis Connerton, was in the headlines last week saying that 40 percent of those he asked to come into the county panel had turned him down.

Connerton took this as an indication that demands of modern football have now become so excessive that players would rather stick with their clubs.

One man who wouldn’t agree with those sentiments is Barry Mulrone. After playing every minute last season for the county, Mulrone was at the heart of the action on Sunday afternoon and as eager for the action as if it was a championship clash in the height of summer.

“A lot people are talking about Gaelic football at inter-county level as if there is no fun left in it,” said Mulrone after Sunday’s win. “But when you’re getting football you have to enjoy it, otherwise you’re not going to play well. I’ve had a few bad injuries down the years and I’m making up for lost time and thoroughly enjoying it again. Starting another season I’m just hoping to stay injury free again, touch wood.”

Mulrone put in some eye-catching blocks and was at the root of a number of scoring counterattacks. However the Devenish man made light of his contribution to the win.

“Football at this time of year isn’t that quick as it could so you should have the chances to make those sort of blocks and turnovers. We started late enough with the pre-season with the way the club league went on so long and I suppose on the county side of things we’re all exited to get back to try and better ourselves from last year. There’s no better place than in the McKenna cup at the start of the year to signal your intent for the season.”

The wing back got the curly finger in added time, meaning he will not now be able to repeat last year’s feat of playing every single minute for Fermanagh, but for Mulrone the key concern is remaining fit and in contention for a starting place.

“Last year I got to play every minute of every game and I kind of wanted to do that again this year, but at the same time there wasn’t long left in the game and you don’t want injuries kicking in again. I want to get starting again against Donegal and we’ve a chance to get into a semi-final of the McKenna Cup so that’s the main goal at the minute.”

For the immediate future though, it’s the visit of Donegal to Brewster Park and the prospect of a McKenna cup semi-final.

“I’d say Donegal will have an experimental enough team out,” said Mulrone. “Rory Gallagher will want to do well when he gets up to Brewster Park. It’ll be another good challenge and the full goal now is to focus on reaching the semi-final of the McKenna cup.”