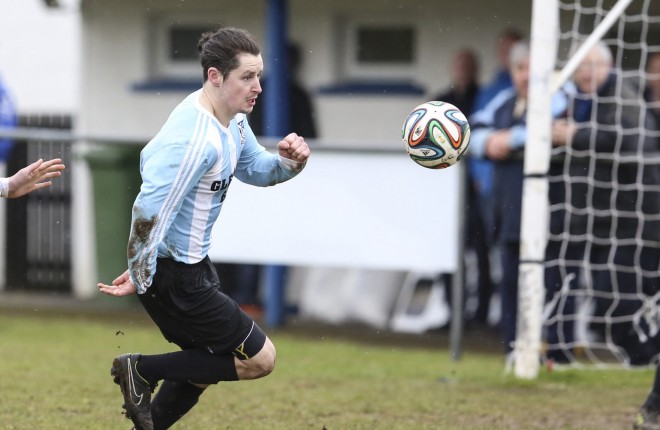 Lisbellaw United made the long journey to Newtownards for their last 32 Junior Cup tie with Ards Rangers on Saturday and simple blew away the hosts in an excellent first 45 minutes.

From the kick-off Lisbellaw were on form and registered their opening goal after just 58 seconds. Some neat passing on the 4G surface saw Ryan O’Keefe scamper down the left and cross for Tiarnan Magee to volley in the opener.

The ‘Law were in the mood for goals early on and Matthew Woods headed in from a Craig Johnston corner for 2-0. The good football continued and a great move down the right seen Craig Johnston and Tiarnan Magee combine to open up the Ards defence before the latter drilled in a low cross for O’Keefe to turn in from close range for 3-0.

The hosts were simply couldn’t cope with the visiting Fermanagh & Western side. Tiarnan Magee netted his second, a fine individual effort having taken the ball at the centre circle, beat two defenders and coolly tucked the ball past the home ‘keeper.

Within 60 seconds it was 5-0, Davy Little with a screamer from outside the penalty area which went in off the underside of the bar however with three minutes remaining in a half bossed by the visitors, Ards were awarded a penalty which they scored.

The second period was somewhat tighter but William McFrederick remained a spectator in the Lisbellaw goals.

A determined Kyle McCleery burst into the penalty area before netting number six as Lisbellaw continued on the front foot, a bit of trickery on the right from Paul McGrath teed up Craig Johnston who grazed the post with a low drive.

Moments later a neat one two between Little and McGrath sent McGrath through on goal, he was taken down for a penalty. Ryan O’Keefe sent the spot kick over the bar though.

Number seven arrived soon enough and it was a hat trick for Magee, glancing in a corner from Little at the near post.

Substitute Ryan Lindsay started the move for the final goal winning possession in the middle of the field before getting onto the end of a cross from Alan Veitch to head in an eighth.

“The opposition wasn’t as bad as the score suggests, everything clicked for us today, we played some great football in fairness although we are well aware that tougher tests lie ahead in the league and cup over the next few months,” said midfielder Paul McGrath after the game.