Advertisement
HomeSportSoccerBallinamallard aim to take the game to Cliftonville
Advertisement 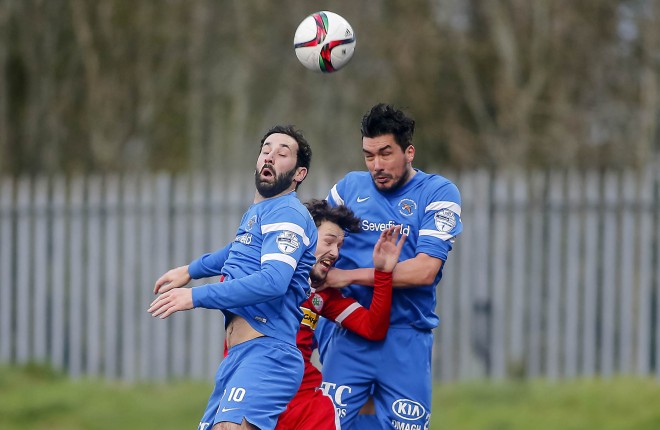 It was a challenge Mallards boss Whitey Anderson had been looking forward to, but now it’s the trip to title challengers Cliftonville he has to plan for.

The Reds have been stuttering in recent weeks and their 3-3 draws with Carrick and Glenavon last week were uncharacteristic blips by what had previously been one of the most miserly defences in the league.

So, in that respect, now might be the perfect time to be taking on Cliftonville and last Friday’s no show means that Whitey Anderson has had a clear week to prepare for the trip to Belfast. There’s been three hard training sessions this week, and Anderson is adamant that he won’t be going up the M1 just to pull down the shutters and hope for the best.

“My simple ideology is that whenever you lose the ball you get plenty of men behind it, when you get the ball you try and attack in numbers. People call it counterattack football, but I think it’s the same for any team,” said the Ballinamallard supremo.

“You want to make it hard for the opposition to score, so you have to be well organised, but you also have to be confident going forward and believe that you can get forward.

“We obviously have to be well organised defensively when Cliftonville have the ball against us on Saturday. On their day are probably one of the best attacking sides in the league. But have to make sure that we also try to hurt them. I believe now going into the last 15 games of the season we have a midfield and attack now that I think can cause teams problems.”

It’s unlikely to be plain sailing in Solitude though, especially with Anderson deprived of one of his most consistent performers this season.

“My biggest disappointment at the present time is that we just got news that Colm McLaughlin is going to be out for a minimum of six weeks with a torn cartilage in his hip. That came in extra time in the Coleraine game, so that game has cost us dearly because Colm has been my player of the year this season.

“The big problem I have is that Leon Carters has played little football this season and probably won’t play for another six weeks. We’re exactly sure what the state of play with him is.”

The Ballinamallard boss has brought back Jake Dykes after a year with Sligo Rovers to help with the situation.

“I’d be hopeful he might be in the squad on Saturday,” said Anderson.

Dykes will come in knowing his new club have a real job of work on their hands retaining their Premiership status. With Dungannon, Carrick and Warrenpoint all making up ground in recent weeks, it is vital Ballinamallard start picking up points sooner rather than later.

“It’s going to come down to the wire between four or teams,” said Anderson. “If you win two or three or games you find yourself going up the table and looking up instead of down. You just need that run. One win can just give everybody that confidence to go on and get three or four wins and then next thing you’re not looking over your shoulder.”