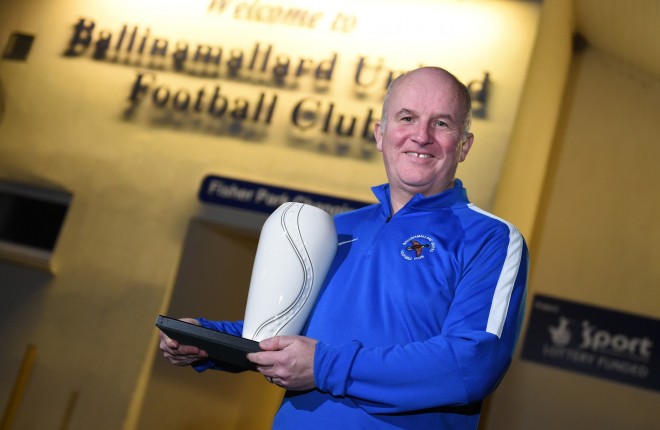 It came on the back of an eye-catching run of results which saw the Fermanagh side take down a roll call of the biggest names in Irish League football.

“To beat Glentoran, Linfield and Portadown and not concede a goal was remarkable,” said Anderson. “We almost beat Crusaders at home and were three minutes from doing that, but they showed why they were champions to come back. It was a remarkable month. It just showed the importance of small margins.

“I still think this squad has the capability of going on a run like that again. I think we can improve more, being honest with you, and that’s what we’re going to need to push ourselves up the table. Sometimes just getting that one result at the start can help you and I still think there’s plenty left for this squad to play for this season.”

The Writers award was Anderson’s second since taking over the reins of the club back in 2005. He is understandably proud of what the Mallards have achieved in that period. But he is also proud to be putting Fermanagh football on the map and giving home-grown players an outlet on the local game’s biggest stage.

“When we came into the Premier League I don’t think anybody expected to last beyond a season,” said Anderson. “We didn’t know what to expect. We’re in our fourth season now and that an achievement, there’s no doubt about that. There’s a lot of hard work goes behind the scenes, from the chairman and committee through to sponsors and especially the players. It takes a collective effort to sustain Premier League football in Fermanagh.

“This club is in its 40th year and we’re very pragmatic about what we do. We’re not saying we’re going to be there forever. We know it’s going to be extremely difficult, but it’s a community club with teams running right through from mini soccer to the Irish League and it takes an awful lot of commitment and effort from everybody to make it work.

“As someone once said there’s very few chimney pots about Fermanagh. The population of Fermanagh is in about 60,000. Lisburn District Council area is about 62,000. Whilst Fermanagh’s a big area it has a small population base and it’s great to be able say half your squad is from the locality.

“It’s very important to have that local interest. Whilst you have to bring players from outside to sustain Premier League football you also have to make sure you keep that local element and give local players a chance. That’s something that I personally am very proud of.

“In the last three years we have had Chris Curran at Cliftonville and Davy Kee and Mark Stafford at Linfield. Would they have been there if they hadn’t had the opportunity that Ballinamallard gave in the Premier League? Those players have gone on to bigger things and left a space for somebody else to come in and take their place and hopefully inspire some other young players around the area to play Premier League football.”

Against the predictions of some pundits, Ballinamallard have endured and thrived in the Premiership. They have worked hard to make themselves established members of the league. Driving that, is a special club spirit, an ambition to be the very best that they can be.

“The spirit within the club is quite incredible and that’s what makes it,” said Anderson. “I’ve always said it’s a small club in Fermanagh, but it’s a club with a big heart and people working extremely hard behind the scenes to make it what it is. There’s an awful lot of time and effort goes into it and the club means so much to the people of Ballinamallard and the local area.

“Without them you don’t have a club. There’s so many fantastic people down there you couldn’t name them all. I’m in my tenth season now and people often say to me I’ve done a remarkable job, but I’m still disappointed we haven’t achieved more. That might sound stupid, but I believe we can still achieve more for the hard working people of the club and hopefully we’ll can give them something more to smile about before the end of the season.”