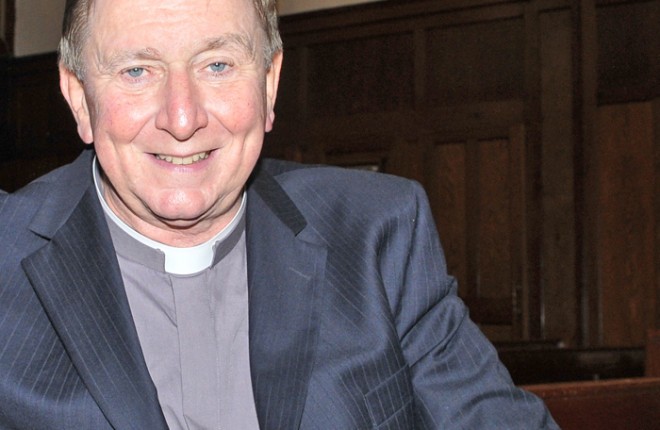 FR Brian D’Arcy has said Pope Francis is the reason he is still a priest, and believes he may have been “pushed out” of the priesthood for his views on God if not for the new “man at the top.”
Speaking to the Fermanagh Herald about his new book, “And Catch the Heart Off Guard”, Fr D’Arcy said he believed the powers-that-be in the Catholic Church had been considering pushing him out for his views on “a God of mercy” before Pope Francis was elected to succeed Pope Benedict XVI.
“Pope Francis is the reason I’m still in the priesthood,” he said, adding he had noticed more people returning to the church since the election of the Argentinian-born pontiff in 2013. ß“Before Pope Francis, the church was a religion based around laws, whereas now it’s a relationship based around the Mercy of God.
“People are not coming back in their droves but they are coming back for the important parts of their lives, such as funerals and so on, and for the seasons such as Christmas. A lot of the anger that had built up against the church is beginning to ease a bit. The man at the top is now speaking the people’s language.  People can live without the church, but they can’t live without God.
“We get people from every parish here at the Graan, and are numbers are holding up very well. They’re definitely up on last year. I’ve been amazed at the numbers we’ve been getting for confessions and counselling, we’ve been very busy this year and we’ve been over-burdened this November.”
Fr D’Arcy, rector of St Gabriel’s Passionist Retreat at the Graan, is well known across Ireland  as a writer, broadcaster and loyal Fermanagh GAA fan. His views on a range of issues have caused controversy within the church in the past, with the Vatican expressing their displeasure with the Belnaleck native and the church censoring his popular Sunday World column.
“And Catch the Heart Off Guard” is his 15th book, and is more contemplative than his previous publications. “It’s unusual compared to my other books, which were mostly autobiographical or based on articles I’d written for the Sunday World,” he said. “This book is more reflective and has excerpts from my sermons, but it’s certainly not a book of sermons. It contains short pieces people can read in the morning and only take a couple of minutes, and will be very suitable for reading through the Year of Mercy which has been announced by Pope Francis.
“The Year of Mercy begins on December 8 and lasts until next November, and will present a more merciful God, the God that I was presenting and they almost pushed me out for. The Graan will be celebrating the Year of Mercy with a Novena at the end of February.”
Fr D’Arcy said people could connect to a God of Mercy, who could help them be merciful towards themselves. “People judge themselves too harshly,” he said. “They need to have hope and forgiveness in their lives. As people have turned away from churches they’ve lost the ability for peaceful reflection in their lives. The book instructs them on how to do that. It has little pieces that will help them reflect interiorly into their own lives and be at peace. If you’re not at peace with yourself you will be at peace with no one.”
On Saturday, November 28 Fr D’Arcy held a book signing at Easons in Enniskillen. “It was great, I had to stay on an extra half an hour, though that was probably as much to do with me chatting,”
he said. “I was thrilled at the number of people who came, we sold around 60 or 70 books in half-an-hour, which isn’t bad.” Having already held book signings in Belfast, Derry and Dublin, Fr D’Arcy is heading to Waterford, Kilkenny, Cork and Tralee this week. Fr D’Arcy said the book was selling well across the country, and among members of all communities and denominations.
“And Catch the Heart Off Guard”, with a title borrowed from Seamus Heaney’s poem “Postscript”, is on sale now and all profits will be distributed to a number of charities.