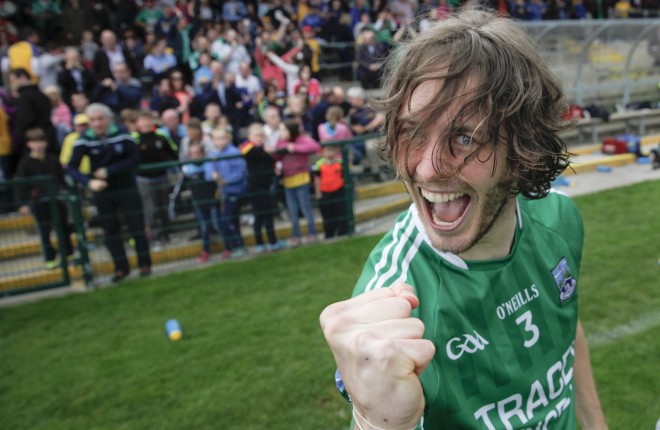 Tiarnan Daly celebrating during a memorable year for Fermanagh GAA.

With the action on the pitch almost wrapped up Chris Breen casts an eye back over the season and reveals his awards for 2015.

2015 could be described as a rollercoaster year for Fermanagh football. The inter-county season dominated the limelight in the summer months, but since September we have all been fully immersed in the club scene.

With the season of goodwill upon us and this being my last column of the year, I thought there is no better way of me signing off, along with adding to the festive spirit, than recognising the achievements of both our clubs and county in 2015, by doling out my end of season awards.

Moment of the year
Fermanagh provided us with a few great days this season. Promotion to division two, along with a respectable championship run which culminated in an All-Ireland quarter-final tie with Dublin in Croke Park.

The memorable moment of the year nevertheless was the final ten minutes in the All-Ireland qualifier against Roscommon. This had everything. From individual brilliance, keeping the crowd on the edge of their seats, to the brilliant commentary from Ger Treacy.

As a player, this type of game was one of those I used to love playing in. For supporters, rarely do we get the opportunity to be involved in such unique moments and this was one of them. Witnessing the euphoria after this result was special. The comeback and result will be etched in the memories of everyone present that day. People still talk of the Meath qualifier in 2004, and I have no doubt the Roscommon game will be the same in the years ahead.

Most memorable goal of the year
Three goals stand out in my memory from this year. First up is the most significant for myself and my own club Enniskillen Gaels, was our smash and grab last minute winner in our relegation play-off clash. Paul Gunn of all players ended up putting the ball in the back of the net. Luckily for us he fisted the ball to the net.

Next up is Sean Quigley’s hit on Dublin’s Stephen Cluxton, when he sent man and ball into the net.

The final and the winner though is Ruairi Corrigan’s virtuoso individual effort against Armagh in the Athletic Grounds. Ruairi showed brilliant composure to side step three Armagh defenders before brilliantly finishing low to the keeper’s bottom left hand corner.

Manager of the year
The Irvinestown duo of Paul Courtney and Shane Goan along with Fermanagh’s Pete McGrath deserve a particular mention for their achievements this year. Although while I believe it is right to pay compliments to all managers who have had very respectable seasons, for me the Derrygonnelly management team get the nod for the Manager of the year.

The Harps men are fitting winners of this award. Going into their final preparations for their senior championship final clash, Fermanagh GAA and in particular the Derrygonnelly Harps club received the terrible news that one of their club stalwarts Damian McGovern had tragically lost his life. How Archie, Michael and the Derrygonnelly team responded to win the championship is a testament to the character of their management. To succeed in the most difficult of tasks in motivating their team, leading them to county success is a credit to them, their club and their community.

County player of the year
There were a number of players who had terrific seasons for Fermanagh this year.

Barry Mulrone played in every single minute of every game for Fermanagh in 2015. He was readily able to adapt his game to suit the different roles he was given throughout the season.

Eoin Donnelly is another leading player. I had the privilege to play with Eoin for a couple of seasons. I was able to witness the high intensity levels to which he trains, how he handles himself professionally, and probably most importantly the unselfish work he puts in for the greater good of the team.

Other prominent players included Richard O’Callaghan and Ruairi Corrigan. The winner of this award though is Sean Quigley. Sean was in terrific form all season. From providing one of the best individual performances of the year when he scored 0-14 versus Antrim, to scoring a total of 3-36 in this year’s championship. Sean has really matured as a county player in 2015 and will continue to be a big player for Fermanagh in seasons to come.

Club player of the year
Three players have been short-listed for this prized award – James Duffy was a key player on the Irvinestown team that won both the intermediate championship and the division two title.

Sean Quigley of Roslea again played a vital role in his club’s path to the final this year.

The award though goes to Derrygonnelly’s Paul Ward who was an inspiration for his team in this year’s championship. He was in sparkling form throughout the year and also played a major role in his club’s run to the league final.

Team of the year
Three teams have been nominated for this accolade. Derrygonnelly and Irvinestown have dominated the silverware at senior level in Fermanagh in 2015 to date, whilst Fermanagh enjoyed league promotion.

My team of the year for 2015 is Irvinestown who remained undefeated in Fermanagh for the last number of months, winning both the intermediate championship and division two. It has been a great season for Irvinestown. If they get a decent start to next season’s campaign they are more than capable of making an impact in division one.

For now though, I hope we all are going to enjoy some downtime in December before refocusing and preparing for new challenges, and hopefully a more streamlined 2016 season.