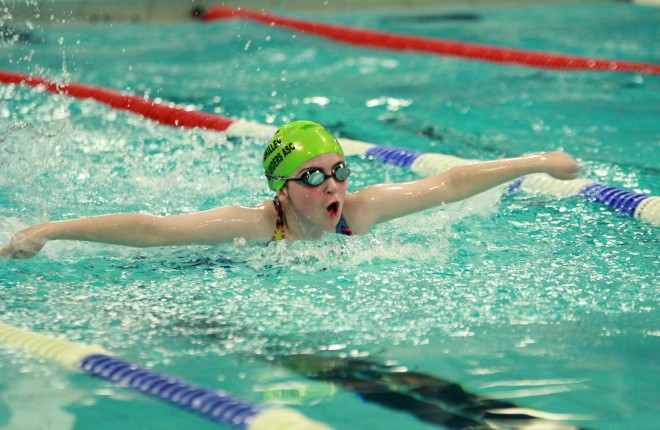 Enniskillen’s Anna Gillespie competing in the butterfly at Armagh.

Enniskillen Lakelanders Provincial Towns League team travelled to the Orchard Leisure Centre for their first away fixture of the year.

The team had many changes due to a larger than usual number of non-available swimmers but they travelled to Armagh confident following two victories at home.

The gala began with the medley relays with the Lakelanders winning seven out of eight to take a 24 point lead.

The last event was the freestyle relay and Enniskillen won seven out of eight to leave the final score Armagh 504 Enniskillen 630.

Special mention must go to Ellie McCartney, Jake Cadden, Sorcha Lavelle and Justin Langford who remained were at the gala.

Another fantastic performance from a relatively inexperienced Enniskillen Lakelanders team, but with many new PBs and lots of first place finishes it shows that the coaching team are building for the future success of the club.

The next PTL fixtures is against Mid-Ulster on Saturday 23rd January in Magherafelt. A win should secure promotion to the next division.