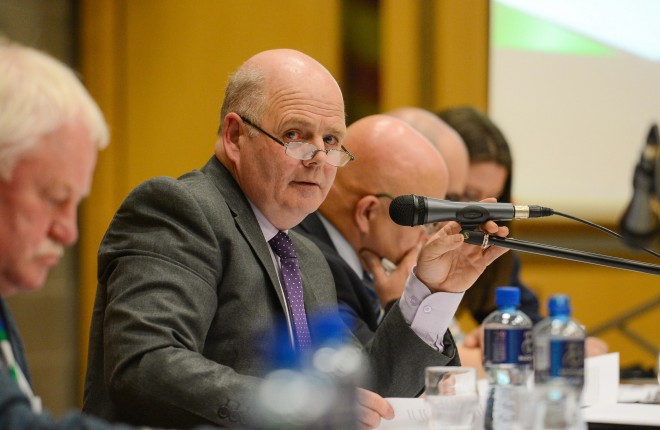 “I am far from happy with the level of club activity during the summer months in football. Our Association grew on the club player, county teams enhance that development.

“During inter-county activity the harsh reality is, the county player isn’t available for club. That clearly tells me clubs must continue on a weekly basis to play games.”

He went on to put forward suggestion made during the year of a number of games played for just a single league point and a number played for three, “an equal amount of games to recuperate league points. Food for thought.”

Despite the lengthy lay off during the summer Dolan still felt that, “We had another successful club year, our leagues for the most part were competitive, and our club championship was entertaining and highly competitive.”

At county level the chairman noted that, “Peter McGrath and his team continued to progress our county senior football team. To be involved in a county team in the modern day game involved huge commitment, sacrifice of personal social life and dietary requirements made all the more difficult by constant travelling.

“Sometimes many of us never appreciate the enormous effort required by those players to make a county panel. Congratulations to all.”

On the hurling front the report commented that, “Nothing gives a county chairman greater pleasure than watching his own county team captain walk up the Hogan Stand steps to receive silverware.

“I had that delightful experience this year, Seamus McCusker, Sean Duffy and all the back room team brought another All Ireland title to our county.”

Elsewhere in his report the Chairman praised the work of several committees and many individuals who had contributed heavily to the well being of the county, one of the former being Club Éirne who provided, “Finance which is crucial to success of our teams. I urge those who can to support Club membership.”

He went on to congratulate PRO Pauric McGurn on winning the GAA writers PRO award of the year and to John Duffy who was named as Lory Meagher player of the year, “Together with Ciaran Corrigan, David and Daniel Teague who also received awards, and to Sean Quigley on his selection on the Irish News team of the year.”

In his concluding remarks the Chairman spoke of the bereavements which had  saddened the county.

Among these had been the tragic death of Oisin McGrath, that of Shane Mulholland, of former GAA stalwarts Paul Corrigan and Malachy Mahon, Pat King a former county team manager, Gerry Timmons and the passing of Damian McGovern whose, “Untimely death also shocked club and county.”

The chairman had also experienced family bereavement and concluded by thanking, “The GAA family for your support to us at that time and since.”