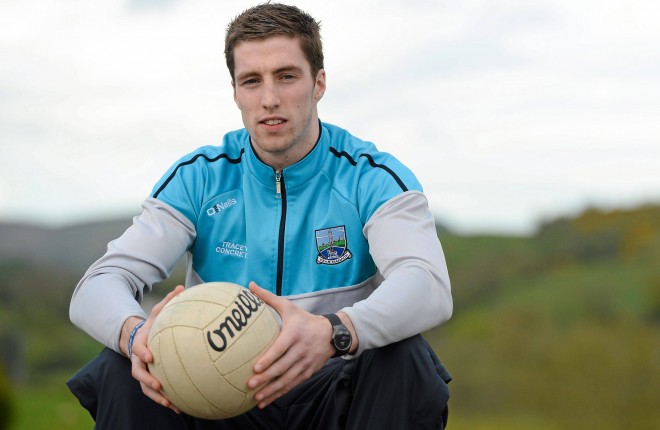 It’s been a season Eoin Donnelly won’t forget in a hurry.

Over the course of 2015 the Fermanagh captain has lead his comrades to a McKenna cup semi-final, promotion from NFL division three, an Ulster semi-final and the last eight of the All-Ireland championship. And of course there was a Fermanagh junior championship title, with Coa also the only Fermanagh side to muster a win in the provincial club championship.

He was recognised with an Irish News award in September alongside Sean Quigley as Fermanagh muscled their way back up to Ulster’s top table. If captains are men who are expected to lead by example, then Eoin Donnelly is a man who fulfils that role to a T.

“Whenever Pete [McGrath] came in I was very proud to be named captain from the start of the year. It’s something you don’t think about when you’re younger, but it’s a privilege to be given that opportunity,” said Donnelly.

“In fairness we have a really good bunch of lads and you don’t get much hassle from them. Most of the lads I’m playing with are lads I’ve grown up with and gone to school with.”

Reflecting back on the season just past, even Donnelly finds it difficult to take in the distance travelled by this Fermanagh team in such a short period.

“It’s hard to believe it’s nearly a year that’s gone by,” said the Fermanagh captain. “It’s a long time since that Laois game and a lot of things have changed, probably for the betterment of the squad. A lot of work has gone in by Pete [McGrath], Ferghal [O’Connor], Leon [Carters] and the coaches. They put everything in place from the start of the year.

“We had a good squad in the McKenna cup and got a lot game time. We got off to a good start in the league and it was a case of building up momentum over the year.

“We knew the way the league panned out that every game was a crucial game. Thankfully we kept it going right the way through. We got promoted which was our objective start of the year.”

A vital element in Fermanagh’s superb 2015 was the way the Erne support swung behind the boys in green. Donnelly was thrilled to be able to savour those moments with the fans after games this year.

“I think some of the older fellas like Clucker [Ryan McCluskey] and Damian Kelly had a better understanding of that, but for the rest of us we didn’t have anything to compare it with. We were supporters going down to Fermanagh games.

“It was great to get that buzz. The amount of messages and support from around the county was great. It gave the whole county a lift. Fermanagh got huge support as the season went on and it definitely pulled us through on a few occasions, that Roscommon game, just to name one.”

But Donnelly is conscious that club football took a back seat while Fermanagh were cutting a swath through the All-Ireland race. That was a difficult situation to square for a man who is as passionately committed to his club as Donnelly is.

“[Fermanagh going well] might improve the participation at underage, but adult players are missing out because they’re not getting so many games with their clubs,” said the Erne star.

“Because of injury and Fermanagh doing so well this year I didn’t get to play many games with the club. We knew that the junior championship was going to be close and any team could beat any other on their day. We got lucky with there being a back door this year and got through that.

“We’re one of those teams who if we have our strongest team out we fancy our chances against most teams in around us.

“Thankfully we got pretty much our full squad out for most games and we did well. A lot the guys have played in Ulster before and won in Ulster.

“We were disappointed the last day [against Rockcorry], because we showed in the end that we shouldn’t really have been so far behind in the first half. We only really had ourselves to blame after starting so poorly in the first half. Unfortunately you aren’t going to be able to turnaround a ten point deficit too many times.

“Our club is a great wee club. We’re very supportive of each other. It was good for the parish to have ourselves and Trillick going well and even Irvinestown on the border so it’s been a good for months for the area.”