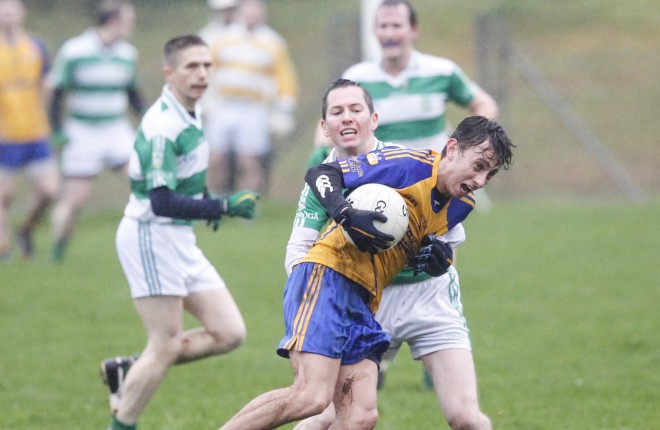 THE UNKNOWN SOLDIERS…Michael Dooris tries to break awa from John Fitzpatrick during the Enniskillen Gaels v Teemore game on Sunday.

THE LAST LINE with CHRIS BREEN

Paraic Duffy kick-started the campaign for major change in GAA fixtures when he released a comprehensive discussion document aimed at tackling those twin GAA bugbears; player welfare and fixtures.

I welcome the document as we all recognise there are issues in the GAA which need addressed. Namely, club players getting a raw deal.

Duffy should be praised for his honesty. I believe his intentions are good. He is one of the few from the upper ranks of the GAA hierarchy who has initiated a discussion which could result in large scale change to the future structures of the GAA.

He does not pretend that burn-out issues don’t exist, and acknowledges the growing impact a stretched inter-county season is having on our club teams.

Duffy’s document arrives at 11 distinct proposals, some of which demand bigger decisions than others. It aims to deliver a more streamlined fixture programme for club players, something which has caused much debate locally over the past number of years and especially the last six months.

The most contentious talking point though is Duffy’s recommendation for the abolition of under 21 competitions. The 11 proposals are as follows:

– Increase the number of two-code weekends in the leagues. [From 2017]

– Discontinue the NFL Division One semi-finals. [From 2017]

– Establish in rule that players who are not in the inter-county match-day panel of 26 must be available to their clubs on the weekends of National League and senior championship games. [From 2017]

– Bring forward the All-Ireland senior football and hurling finals by two weeks. Play the football final on the first Sunday in September and the hurling final two weeks previously.

– Play extra time at the end of all drawn games. Replays to be fixed only after extra time in a drawn game has not produced a definite result. [From 2017]

– Discontinue the All-Ireland Junior football and Intermediate hurling championships. [From 2017]

– Introduce a calendar-year fixtures schedule. [From 2018]

I think it’s best to start off discussing some proposals I agree with. Abolishing the NFL Division One semi-finals is a no brainer.

Bringing forward the All-Ireland senior football and hurling finals by two weeks is another positive move, although for me the problem doesn’t lie in August or September for the vast majority of counties, it’s the few months preceding it.

The recommendation to play extra time at the end of all drawn games is a must if we are looking to get a proper fixtures schedule. I was surprised that the GAA were prepared to make this proposal given the potential financial loss, however on the flip of this, the GAA has been ignoring its primary currency for long enough, its players.

Having experience of playing county football, I know county players want to give their all to their clubs. After all the club is in our DNA. With the current fixture calendar this makes it at times impossible for these players to give as they would like into their clubs, so this is another positive move.

Now, to the main proposal I disagree with. I would question Duffy’s call to discontinue the under 21 championship. It is a massive step up from minor to senior and this competition acts as a platform for many players as they attempt to make the transition. This competition has also proved as a catalyst for many players to launch successful careers, along with providing senior managers an opportunity for talent spotting.

Senior inter-county managers want a full pre-season for their players, and currently this competition comes at a period when the fixture calendar is already crammed. Players have to play in pre-season tournaments such as the McKenna cup along with many having to play for their colleges in third level competitions.

So the competition in its current slot in the calendar is a problem. I believe the GAA need to find an alternative date when this competition could be played. If the GAA agree to amend the entire fixture calendar then there should be a window for the u-21s. To simply remove the competition is wrong. We need a bridge between underage and senior.

There is plenty of food for thought and it may prove difficult at GAA Congress to get approvals for some of Duffy’s reasonable proposals. If we are to treat all players equally, change is necessary. If we don’t evolve club players will be lost. It’s time for actions to replace words.