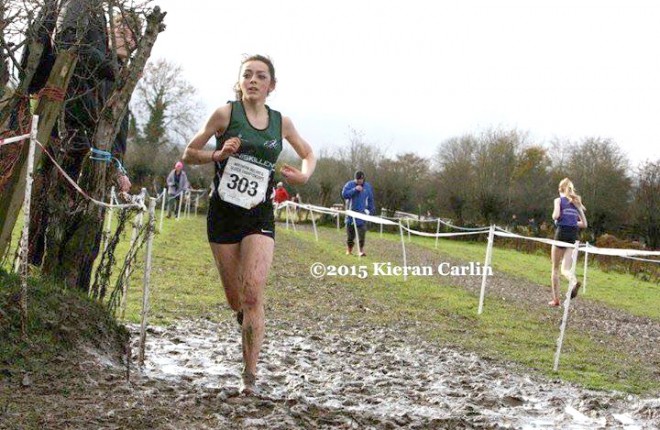 Edel Monaghan on here way to a second individual Ulster silver medal in a fortnight.

The first Ulster cross country races in Jordanstown two weeks ago were bathed in sunshine.

However, on Sunday it was back to more familiar cross country conditions. The rain and mud made it very challenging underfoot for the Ulster uneven age groups in Stranorlar in Donegal.

There were fewer Enniskillen Running Club (ERC) athletes competing, but the mud splattered blue vests of St Michael’s were out in force.

Despite the wintry conditions, all local runners competed bravely.

St Michael’s best return came in the under 13s where Oisin Cassidy led the team home in 11th, followed closely by Diarmaid King. With good runs further down the field too the team came in third overall.

There was another strong performance in the under 17 boys section. Jacob Britton was the first blue vest home in 15th with Domhnall Lynam just behind as St Michael’s came in fourth in the overall standings.

Young Croiadh Monaghan and Abbie Barrett of ERC had storming runs in their respective age groups while Aoife Farrell had a great run with another top 15 finish in Ulster.

17-year-old Edel Monaghan put the difficult conditions aside to win her second individual Ulster silver medal in a fortnight in the u19 girls race. She can now look forward to leading her u18 ERC team-mates in the all Ireland in Santry in two weeks time.

After the Ulster uneven age groups in Stranorlar in Donegal and the even age groups in Jordanstown St Michael’s coach Francie Shaw has professed himself, “Reasonably satisfied with the results over the two weekends of age group championship action.”

It isn’t unqualified praise though from the experienced coach, with more effort demanded as the season starts to take off in earnest.

“Last year we entered seven age groups and took medals in four of those, this year the return was two from six,” said Shaw. “It was a bit disappointing not to get something from the u14 and u17 age groups, but it is very early in the season.

“Perhaps the biggest thing our athletes need to look at is how they can start getting more individuals challenging for medals and top ten positions. If they want to do this some of the athletes in the older age groups in particular need to step up and put a bit more focus on their running.”

Shaw remains confident his runners have the ability to step up to the mark.

“Several of them have shown the talent to be Ulster medal contenders when younger but after 15 and 16 hard work is they key to progression.

“We have a few races in early December when hopefully we will see a bit more progression, but even that this early stage of the season it is clear that it will be very difficult to match last year’s Ulster schools performances.”