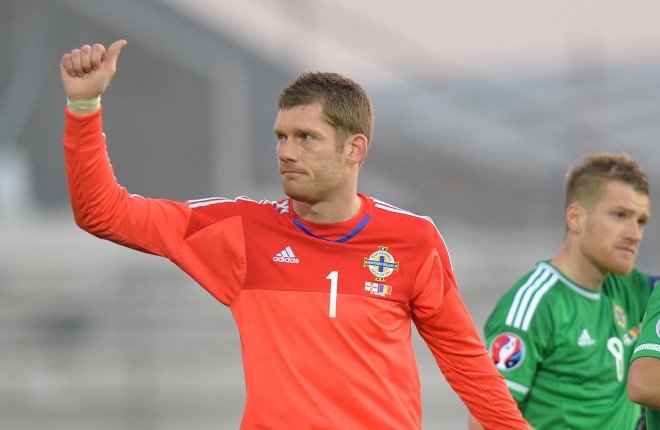 Fermanagh Herald’s Sports Person of the Month for October has come a long way in 2015.

“It’s just been a bit of a whirlwind,” admits Northern Ireland shot-stopper Michael McGovern. “The last 18 months I’ve gone from playing in the second tier in Scotland in the Championship to playing in Premier League for Hamilton. I’m really enjoying it and the team are doing really well.

“Then obviously over the last 12 months with Northern Ireland have been great. I had one cap in 2010. I got my second cap in March and I’ve played eight times since then so it’s been brilliant.

“It’s been absolutely unbelieveable, I never would have dreamt it would have gone so well, especially with the national set-up, playing and being part of a team which achieved such massive things.”

McGovern played a key role as Northern Ireland nailed down qualification for Euro 2016. The Enniskillen man is full of praise for the way that Michael O’Neill has helped transform the North’s fortunes.

“Seven of the players who played when we drew with the Faroe Islands in 2010 that night played again against them in this Euro qualification so the team hasn’t changed that much,” said McGovern. “Micheal O’Neill has to take a lot of credit because he has got the results with the same set of players who weren’t getting results and even players who weren’t getting results in the last campaign, although there were good performances. He’s got to take massive credit for the success.”

McGovern was in action for Northern Ireland last Friday and kept a clean sheet in a 1-0 friendly victory over Latvia. Roy Carroll got the second half in that game, and the competition for the number one jersey puts McGovern’s progress over the past year in sharp relief.

“Interviewers ask me do I consider myself number one choice now and I really don’t,” said the 31-year-old netminder. “That’s down to the level of competition in the goal-keeping department. Roy Carroll has been excellent since he’s come back and Alan Mannus’s form is constantly been very high and he has been doing really well in the Scottish Premiership for St Johnstone. So I don’t look too far ahead.

“I was really happy to start the game on Friday and happy we got a clean sheet as well. If I play the next game I’ll be delight and if I don’t I’ll be happy for whoever does.

Every cap I get is precious and an honour for me so I don’t take things for granted. I just keep working hard and if I get opportunities hopefully I can take them. But if someone plays then I’ll be supporting them because there’s a good team spirit in Northern Ireland.”

Now there are months of anticipation to look forward to as the countdown starts towards next year’s festival of football at Euro 2016.

“France is something you look forward to in the back of your mind,” said McGovern. “We’ve had games in September, October and November and we’ve been meeting up regularly over the last three months. Now we don’t have any games for the next four months until March.

“From a player’s point of view it’s down to ourselves to look after our own house. Do the hard work for our clubs, try and perform as best we can, stay the best condition we can fitness-wise.

There’s not many friendlies between now and the Euro’s, maybe four or five. There’s not loads of friendlies to show Michael [O’Neill] what you can do.”

The excitement around Euro 2016 also means McGovern is feeling the love whenever he returns home.

“Everybody’s been really good to me,” said McGovern. “I’ve been home quite a lot recently, but I haven’t been out too much in Enniskillen. I’ve been more spending time with the family, but any time I’ve been out in Enniskillen meeting people the first thing that everybody talks to you about is Northern Ireland and the Euros. It’s on the tip of everybody’s tongue, which is brilliant.

“It’s great to see Northern Ireland spoken of in a positive light.There’s been many years where we haven’t done as well as we should have so it’s great to have achieved qualification and it’s nice that people are excited.”