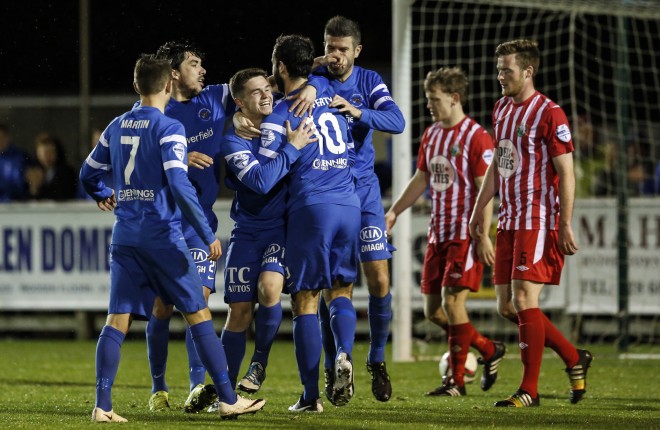 Michael McCrudden celebrates scoring a goal against Warrenpoint with an assist from Johnny Lafferty.

What a difference a month makes.

At the start of October Ballinamallard were second from bottom of the Danske Premier League with just five points, but look at them now, sitting in eighth position with 15 points.

Manager Whitey Anderson knows that October has made a huge difference to everyone at the club with his side scoring 10 goals, conceding two and most of those games against top sides.

But it’s back to reality on Saturday when they visit Mourneview Park to take on high flying Glenavon in fifth place.

“Every game is different and they are all hard. Glenavon are building a good squad there and have had a good start to the season. But we are going there in a rich vein of form. There is great confidence in the camp now and the players are bouncing in training and in games,” said the Mallards boss.

“Winning breeds confidence and that has brought a more relaxed feel to our game. But make no doubt about it, Saturday’s game will be a tough one. If we work as hard as we have been and do the right things then I think we can get a good result at Mourneview,” said Anderson.

The Ferney Park side have relied on their second half performances to help them win through games, but Anderson doesn’t mind.

“Yes, we do have to start games better, but our second half showings have been very impressive. We’ve been working really hard behind the scenes, the players and the back room staff and it’s paying dividends on the pitch at the moment.”

Anderson feels the away win at Glentoran some weeks ago really kick started their good run.

“The good thing is that we have pushed on from there. Our goal difference has improved significantly. Indeed we’re almost on the plus side.”

“There is no doubt the visit to Glenavon will be a tough one for us. They are a strong side going forward and have goal scorers all over the park. But we have plenty of belief now and we have to keep putting that into practice,” said Anderson.

Ballinamallard could have James McKenna back in the squad following his suspension and are hopeful that Johnny Lafferty will recover from a slight calf strain. Cathal Beacom could also join the squad after injury.
But Anderson says these players will have to fight for their places.

“With players growing in confidence, performances are improving every week. Players who have been out injured or suspended will have to work hard to get back in the side and may have to wait for opportunities to arise,” said Anderson.