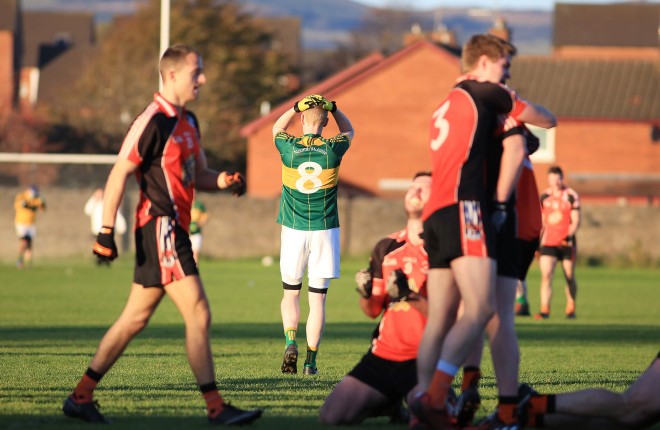 Irvinestown players hold their heads as the final whistle blows.

Irvinestown player-manager Shane Goan stayed on for the full duration of this game, and he almost played a crucial part in the sending it to extra time.

His laser-guided ball to Tiarnan Daly gave the centre back a great chance to get the leveller, but a brilliant block by Martin McClenaghan saw the lifeline snatched from his side’s grasp.

“It was an end to end game of football,” said Goan. “We’re bitterly disappointed. That game could have gone any way. At the end of the day a draw would probably have been a fair result, but that’s football for you, it just wasn’t to be.”

The St Molaise’s supremo was prone on the pitch as the final whistle went. He believes this was one where game management let the visitors down and deprived them of a place in Ulster’s last four.

“When you look it, at one stage in the second half we went three points up,” said Goan. “We had a couple of chances after that to put the game to bed, but we didn’t take them. They turned the ball over and they and ran up the field and got crucial points to draw level and it was nip and tuck from there.

“I thought at times in the game our final pass let us down in crucial areas.

When we got the goal we had a chance to kick on. I honestly thought we were going really well. But we missed a couple of handy ones, they turned the ball over well and it just wasn’t to be

“It could have gone either way, but they got their goal at the right time. We battled hard and pushed, got it back to within a point Tiarnan had a shot at the end, but it was well blocked down and the whistle went.

Shane Goan, pictured right, is nothing if not a gentleman though and he was gracious in defeat, paying tribute to a Glenavy team who played through the emotional pain barrier barely a week after losing their manager, Francie Doone.

“I can’t take the victory away from Glenavy, they’ve had a tough week. With their manager passing away it wouldn’t have been easy, but full credit to them. We came here with a game plan, we worked hard. They came with their game plan too, but at the end up that game could have gone either way.

“They were very physical in around the middle third, we knew that, so going into the game our thing was not to be going into the tackle. As you’ll have seen in the second half there were too many times when we were turned over in our half, where they were able to move the ball from and get themselves back into the game.”

Corrigan Park proved a compact venue and Glenavy deployed their local knowledge to maximum effect. They weren’t afraid to shoot from close to the sidelines, and that helped them into an early six point lead. Over the course of the game they converted 16 of 21 shots, a return which proved decisive in the end. That’s all history for Irvinestown now though, and they return to the bread and butter of trying to bring division one football back St Molaise Park.

“They were very clinical,” said Goan. “They didn’t miss much, everything they hit seemed to go over. It’ll be hard to get the boys heads lifted after that, because we did put in a serious effort to give Ulster a rattle. It’s a learning curve for Irvinestown, but it’s been a great season to date and we still have the league to look forward to.”