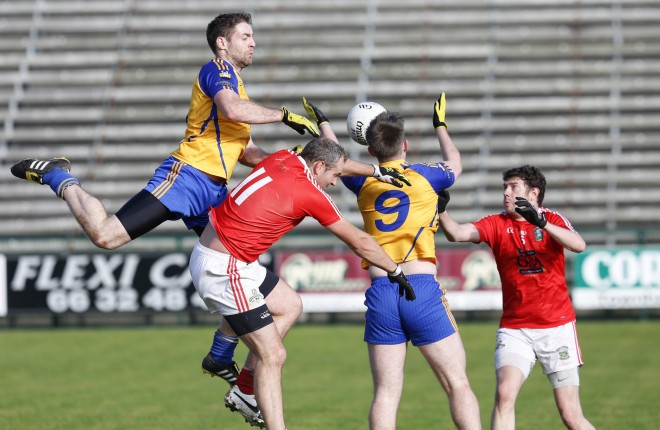 Netownbutler and Enniskillen Gaels battling it out an unglamorous winter fixture.

It’s the first week of November and for most clubs their season should have been finished over a month ago.

Unfortunately the fixture plans of the Fermanagh CCC were thrown up in the air when the county senior team progressed to the quarter finals of the All-Ireland championship.

For a lot of players and managers it can be hard to get motivated to go out and train in these weeks, for those with nothing to play for, training is probably non-existent and even for teams that are trying to avoid relegation or get to a league final it can be hard to have a constructive training session because numbers are low for a variety of reasons.

At this time of the year students are back at college and under 21 and minor trials have started which puts added pressure on numbers and when a team is having a bad season or on a bad run of defeats it can be easy for players to take the easy way out and miss training with a silly excuse, which, if it was around championship time would never enter the players thoughts.

If you were looking from a bigger County you would wonder what was going on when you consider that there is only 20 senior clubs in Fermanagh.

For example Cavan have their leagues wrapped up bar a few relegation and promotion play-offs and they have twice the number of clubs that Fermanagh have.

The scenario this year was a disaster waiting to happen, the CCC should take some of the blame, but clubs must take a lot of the responsibility as well. Since the back door was introduced in the All-Ireland series there has always been a chance that Fermanagh county games could run long into the summer, which could put club football on hold. Indeed that has been the case in a number of seasons.

After the historic run to the semi-final in 2004, there was a shield competition implemented in 2005 so that club football could go ahead without county players. This meant the league consisted of only 9 league games so it gave clubs little breathing space when it came to avoiding relegation or getting to a league final.

The trophy for the shield competition meant that the shield was taken relatively seriously and it gave club players regular football in the summer months.

Unfortunately Fermanagh were beat in the first round of the Ulster championship and the All-Ireland series. With the league placings and championship status being inter-twinned clubs felt nine games wasn’t enough to decide their championship fate so the shield was done away with after a year.

The Fermanagh management too must take a portion of the blame. They had agreed to the fixture list at the start of the year, but then asked for it to be changed so that they could have full access to the county players leading up to the league final and the back door of the championship.

You can understand Pete’s desire to have full access to his players because he is judged on results and if club games were played he might have lost a few crucial players to injury, but then on the flip side there might be 10-12 players who are on the sub bench who are getting no games yet doing all of the training. Maybe letting these players play some of the club games could keep them ready for a match, if needed, and also help clubs that have a high number of county players.

Starred games, club games without county players, were also introduced and this went some way to relieving some of the fixture congestion.

This year the CCC had a provision in place for three rounds of starred games, two of which were played, but some clubs objected to the last round being played because they were missing more county players than other teams.

Of course you can understand their concerns, but have these clubs thought of the effect it has on the 10-15 players from their own club that are getting no football in the summer months and when it gets to this time of year can’t be bothered going out to train on a cold wet Tuesday night.

So what can be done? Bringing back the shield competition could help and with league placings having no bearing on championship status hopefully it will stick around for longer than a season.

Starting the leagues earlier might also help. The CCC also has to make sure the fixtures master plan is adhered to as closely as possible.

A bit of common sense from clubs should also be taken because if they ask their players I’m sure they would tell them that they don’t want to be training and playing matches in the month of November.