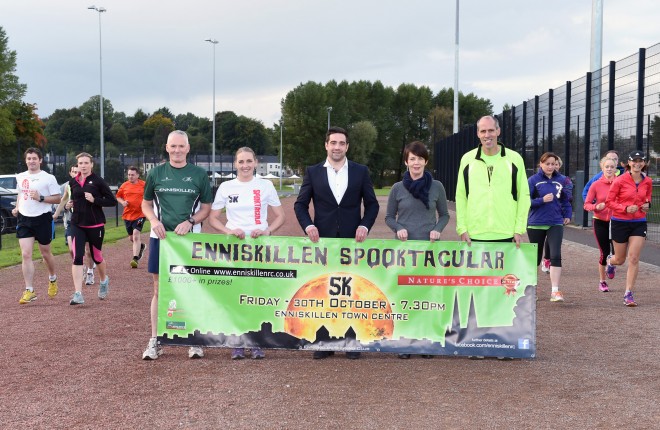 A MONSTER crowd will have a spooktacular time on the streets of Enniskillen this month as runners from across the province and further afield line up for what is fast becoming one of the biggest races of the year.

The fifth annual Enniskillen Spooktacular 5k Run will take place on Friday, October 30 – and organisers are promising an evening of frighteningly good fun as well as top quality action.

A huge field of over 500 entries toed the starting line last year for the two and a half lap circuit of the island town. These ranged from the fleet-footed competitors at the front, to large numbers of participants in fancy dress, to teams from local companies raising money for charities.

For 2015, organisers from Enniskillen Running Club are pulling out all the stops to ensure that this year’s edition will be the biggest and best Spooktacular yet.

Race director Dessie Elton said, “The Spooktacular has gone from strength to strength since it was launched. As well as being a very competitive race, with some great runners battling it out at the front end, it has firmly established itself as a Halloween tradition. It’s one of the very few night-time races in the dark through the streets of a town, which gives it a unique, special atmosphere.

“We want to make it an evening to remember for all those taking part. We are very thankful for the generous support of our main sponsor Nuala Lilley of Nature’s Choice, and all the other local businesses who are backing the race – O’Neill’s Sportswear, TP Toppings, Ferguson Solicitors, Lochside Garage, Aiken Auto Spares, Office Repair Centre Maguiresbridge, Lakeland Cycles, Speedy Reg, Future Renewables, Martin Carey Insurance, Little Farm Supplies and JN Contracts.

“Their help means that as well as a bumper prize fund of over £1,000, the first 500 entries will receive technical T-shirts, as well as flashing LED armbands which will add to the spectacle, the event will be fully chip-timed and there will be plenty of post-race soup and stew at the prize-giving afterwards at race HQ in Pat’s Bar.”

The race, which starts at the Diamond at 7.30pm and finishes back on the main street, is set once again to be hotly contested.

The generous prize fund is expected to attract a number of leading runners to the town, but they will be hard-pressed to take the title away from Fermanagh’s finest.

Last year Fermanagh’s Stephen Prentice was first over the line in a time of 15.55, followed closely by Enniskillen Running Club’s Conan McCaughey in 16.01.

Local runners haven’t fared so well in the women’s field. Last year’s victor was Claire Connor of North Belfast Harriers in a time of 18.29. She followed in the footsteps of previous winners Breege Connolly, Teresa McGloin of Finn Valley and Patricia O’Hagan of the St Peter’s Club in Lurgan.

The course is certified by NI Athletics, and a huge army of marshals and volunteers will be on hand to make sure everything goes smoothly.

“We also have a new course this year with a very fast start so we are hoping to see some record breaking times, as well as lots of individual PBs for runners throughout the field,” said Elton.

Online entries can be made at the Enniskillen Running Club website www.enniskillenrc.co.uk