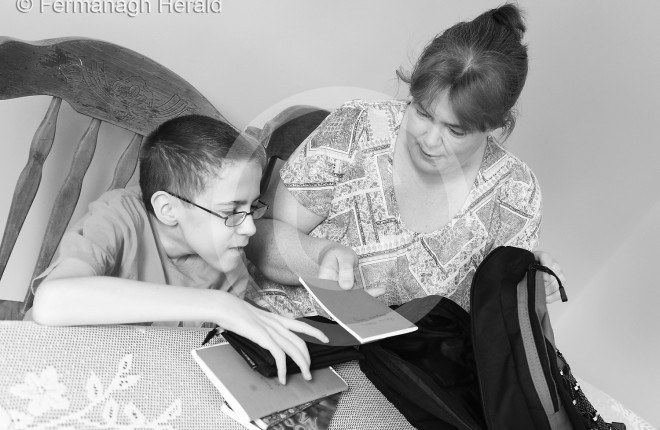 The 12-year-old’s attendance at school had been in doubt due to budget cuts, but thanks to his mother’s persistence and money being released by the Department of Education for construction work at the school Patrick will attend class from Friday, November 6.

Patrick was diagnosed with severe ‘scoliosis’ as well as ‘kyphosis’ when he was young leaving him with a condition in which his spine is at an angle of over 100 rather than 180 degrees. In order for him to attend St Mary’s work has had to be carried out at the school to install hand rails, wheelchair ramps and a special changing room.

With funding initially not available for this work it took the persistence of mother Wendy to ensure Patrick would join his brother Declan at the school. Construction work began at the school on September 17 and next Friday Patrick will get a chance to see his new surroundings, before officially starting with his classmates a week later.

Mother Wendy Haren admitted that Patrick is a bit anxious about starting class, but is glad he will be soon be able to join his brother at the school.

“He’s been off school since June and his health isn’t great at the minute. He has to go on a ventilator at night time from the end of the month to help with his breathing so we have that to worry about also. We’re just going to start him off very slowly.

“The school have been great though and they’re just going to work around Patrick. He’s going to do 10am to 1.30pm once a week on a Friday.”

She continued
“I know he is worried, but he’ll be fine. We’re just going to start him off very slowly and see how he gets on. He might only be able to do one day a week to start with, but we’ll build him up slowly and maybe go for the three days after Christmas. He’s going to look so small though as he only looks three or four, but I know the rest of the class are so excited about having him in the class, so he will be totally ruined.