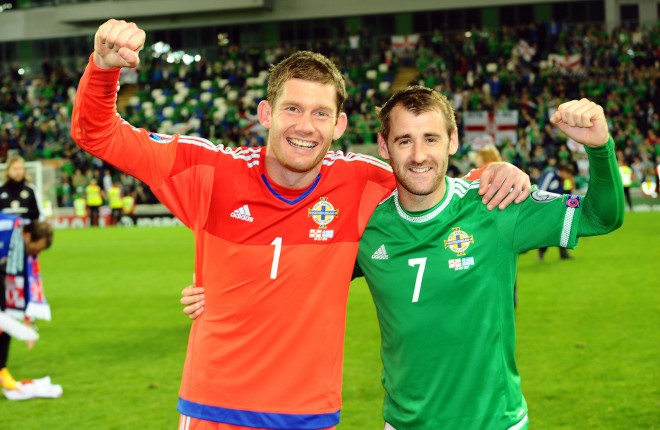 It’s some journey from keeping nets for Enniskillen Town United to taking on the best at the Euro 2016 finals in France, but that’s what Michael McGovern has just achieved.

McGovern leap-frogged fellow Fermanagh man Roy Carroll to become Michael O’Neill’s number one towards the end of the Euro 2016 campaign and has played a pivotal role in the decisive games of Northern Ireland’s Euro bid. Qualification was clinched last Thursday with a 3-1 victory over Greece with Sunday’s 1-1 draw with Finland sealing their place as group leaders. When the Fermanagh Herald caught up with McGovern on Tuesday the Enniskillen man was still on a high.

“I don’t think I’ve quite come back down to earth yet,” said McGovern. “It’s still sinking in, the enormity of what we’ve achieved. Once the groups are drawn maybe it’ll become a bit more real. But we’re just revelling in the fact that we’ve qualified, that was the number one aim. We didn’t really think to much about what qualification would mean. It’s a bit surreal to be honest, but it’s a brilliant feeling.”

The 31-year-old shot-stopper is delighted to be part of a strong Fermanagh contribution to the successful campaign, with Kyle Lafferty and Roy Carroll also playing significant roles in qualification.

“It’s a proud moment for myself and the boys from Fermanagh” said McGovern. “We’re representing Northern Ireland, but we’re representing Fermanagh as well and we’re really happy to be doing that. Hopefully that will encourage more players to take up football. It shows that even though we are a small county, if you are good enough there are opportunities for you there to go on and do what we have done.”

Although qualification was secured last Thursday, Sunday’s clash with Finland means McGovern hasn’t had much opportunity to celebrate the achievement with friends and family.

“It’s been really hectic so I haven’t been able to catch up as much as I would have liked. I just got back last night [Monday] to Glasgow. I spoke to Mum and Dad and my sisters and brother obviously, but it will be good to get speaking to them all properly. My Mum and Dad were actually out in Greece on holidays during the first game so they were just made up. They watched the game on Greek TV and they mightn’t have been able to follow the commentary, but they were over the moon with the result.”

To put some perspective on the achievement, Northern Ireland have become the first fifth seed ever to qualify for a major tournament.

“We’ve made history by qualifying,” said McGovern. “We’re the first Northern Ireland team to go to the Euros, but we’ve done it in style. We finished top of the group and to do that was the icing on the cake.”

The international exposure has also been a real shot in the arm for the Hamilton Academical keepers professional profile.

“It can only be a good thing for you training at that level,” said McGovern. “For me personally it’s a big step up from playing in the Scottish Premiership. It’s so much more high profile and it’s a great opportunity for me as a player to test myself against the best players in world football. It’s an opportunity I’m so grateful for and I’ve loved every single moment of it. I’ve eight caps now and I’ve picked up seven of them in the last six months. Things are going really well and I want to continue that on, continue my form with the club and work hard. If I do that hopefully the good times will keep coming.”

“It is brilliant to qualify. I won’t forget Thursday night in a hurry,” said Carroll. “I haven’t got many years left in my career and I’ll enjoy every minute of it.

“Qualifying for the Euro finals is one of the highest points of my career. I had difficult times before, everybody knows, so to play the first five games of this campaign has been fantastic.

“I had a slight injury in the summer that upset my stomach, and things changed for the Romania game in June. Michael came in and he has done fantastic.

“He’s got the jersey and me and Alan [Mannus] are here to keep him on his toes. We’ll keep pushing him and that’s what you need as a team. We have that with Northern Ireland now, a lot of players fighting for positions.”

Meanwhile Kesh-born Lafferty, whose seven goals were instrumental in securing Northern Ireland’s first ever appearance at the finals, used the opportunity to make a quip when asked who he’d like to play

“I’d like to test myself against Neymar [of Brazil], although I’m not sure how many goals he got in this campaign. It doesn’t matter who we get,” said Lafferty.

The draw for the finals takes place on December 12.