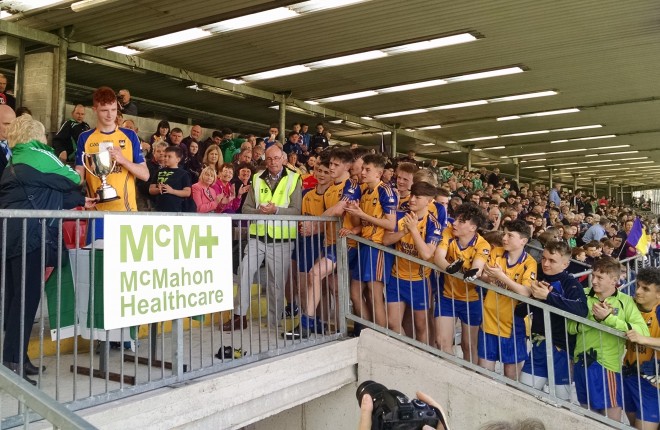 Eoin Beacom receives the trophy as Enniskillen Gaels are crowned under 16 Fermanagh champions.

Enniskillen cruised to the Fermanagh under 16 title, comprehensively outclassing St Joseph’s in this one sided final.

The writing was on the wall a minute and a half into the game when Conor Love’s point effort dropped in to the top left corner of David McKenna’s net.

Unfortunately for McKenna the first 30 was to be a sustained assault on his post, Sean Cassidy the only man who made any attacking effort of note.

The points flowed with ease for Enniskillen Ronan Quinn, Conor Love and Matthew Dixon popping over before Brandon Horan picked out Conor Love with a good ball and he plundered his second goal of the game.

Matthew Dixon pointed before the third Gaels goal arrived on 11 minutes, Calum Jones chipping the ball home from the edge of the area with time and space to pick his spot.

Jones added a point direct from the kick out with a further white flag being raised by Eoin Beacom.

When John Reihill casually palmed home from a metre out at the end of the first quarter it was Enniskillen Gaels 4-6 to no score.

Enniskillen contented themselves with points in the second quarter as Ederney were slightly more game. Gavin Greene , Calum Jones, Conor Love, John Reihill and Ronan Beattie all registered to make it Enniskillen 4-11 St Joseph’s 0-0 at the turnover.

The Gaels showed their teeth early in the second half, John Reihill goaling after being very graciously set up by Conor Love. There were points from Ronan Beattie and Eoin Beacom before Love added a goal of his own, making it 6-13 to no score.

After that goals arrived from Matthew Dixon, Eoin Beacom and John Reihill to definitively end the contest just five minutes into the second half.

A Conor Love point preceded the biggest cheer of the day as Pól McKervey steered over a free for Ederney’s opening score.

However the one way traffic resumed shortly after that, Matthew Dixon with a nice point before sub Fergal Quinn who tapped home for the Gaels tenth goal. It was at this point we discovered the score board does not go higher than nine for goals in Brewster Park.

There were further points from Fergal Quinn and Ronan Beattie point, before goals from Ronan Beattie and Patrick Cassidy put the tin hat on a miserable day for Ederney.

A superb result for Niall Jones men who will now head to the Paul McGirr Ulster under 16 championship tournament positively brimming with confidence.