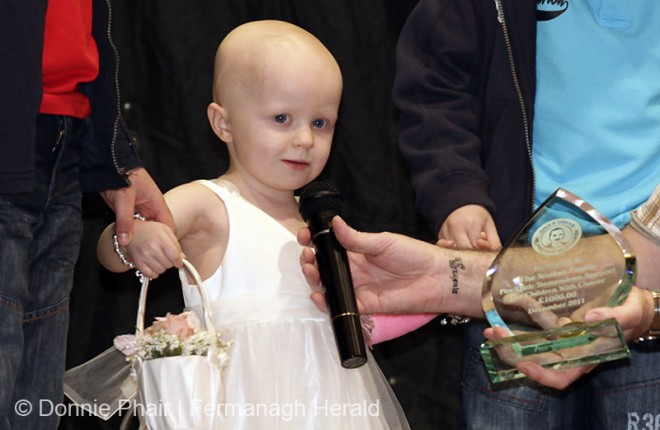 IRVINESTOWN and Ederney were communities in mourning this week following the death of six year old Tilly Walker.

Inspirational Tilly who had won the hearts of so many, died on Friday following a four year battle against cancer.

The schoolgirl was diagnosed with the disease aged two and had undergone a number of operations, as well as chemotherapy.

She subsequently developed brain tumours and had to travel to Belfast every day for seven weeks for treatment.

A pupil of Irvinestown Primary School, Tilly attended the school up until her death on Friday and had taken part in school assembly the day before she died.

During her battle with cancer many fund-raising activities were held, including the Cycle For Tilly event which was held in Irvinestown and raised £13,000. Tilly along with her older brothers Dara and Jordan and mum and dad, Evelyn and Gordon were often pictured at the events. The Walkers have strong family ties in both Irvinestown and Ederney. Tilly’s mother’s family are Maguires from Ederney.

George Beacom, manager of the Bawnacre Centre said, “Tilly, the six year old darling baby daughter of Gordon and Evelyn, who in short years and despite her illness had touched the hearts and minds of people of all ages with her charm, intelligence and sense of humour.

“Shortly after her return from Lapland last December Tilly had loads of smiles for everyone when she appeared at the Clock Tower at midnight on Christmas Eve to place a model of the baby Jesus in the Nativity Scene built by Irvinestown Youth Club. Now she is surely an angel in heaven.”

During the service Tilly’s mother Evelyn gave a moving tribute to her daughter showing her love for life in her few short years.

In his address to a packed congregation Rev Irwin said, that he had ‘no doubt that Jesus met Tilly’ when she passed away on Friday and that she now had a place in heaven. He also noted that Tilly enjoyed life to the full and love going to school.
Since her death Facebook has been flooded with tributes to a much loved little girl.