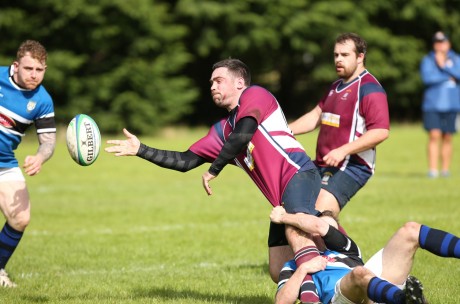 Michael Cadden offloads the ball to a team mate

Enniskillen 3
It was a red dawn for Enniskillen’s league campaign on Saturday away to Coleraine RFC as the sending off of forward Jamie Johnston, following an innocuous looking incident, left the Skins men with an uphill battle that proved too tall a task in the end.

Coach Norman Richmond was clearly frustrated by the result which marked a nightmarish beginning to a season carrying a hefty burden of expectation. He highlighted the sending off as a turning point, but admitted there were issues in other areas and the team could have reacted better to the task at hand.

“The scoreline on Saturday was not a fair reflection of the performance delivered by the team. From the start we competed well, although I would have preferred the team to be more dominant in the opening exchanges; that said we still took a three point lead following some excellent interplay between the forwards and backs,” said Richmond.

“To lose an influential player like Jamie Johnston in the following minutes was a blow to the team and had an ultimate effect on the final score. Additionally our line-out didn’t function as fluently as it had done in pre-season and Coleraine duly took advantage of that. Without possession our backs weren’t able to display their attacking prowess and furthermore the kicking out of hand was disappointing and immediately put us under pressure from the attacking back three of Coleraine.

“Then there was a questionable yellow card issued to Mark O’Shea in the second half which left us with 13 men and at the mercy of a well drilled team, and the scoring margin really escalated at that stage. The red card ultimately sealed our fate and it’s unfortunate as the early exchanges made for an exciting game.

“The final score does not reflect where this team is. Michael Cadden had a very strong game as did Kaine Holden. In the backs I felt that Paddy McCleery and Nathan Richmond’s work rate was good and stood up to the test both in attack and defence. We were missing a number of players who all return for this Saturday’s game against Ballymoney who, on their home patch, will be no easy game for us.”

Richmond then highlighted the importance of moving on from this unfortunate false start and refocusing for a long season of rugby.
“I know the players are all bitterly disappointed with the result, but hopefully this is our ‘poor game of the season’, a bit like the Randalstown game away last year and I know that Alan Wilkinson and the rest of the players will have a point to prove this Saturday.”