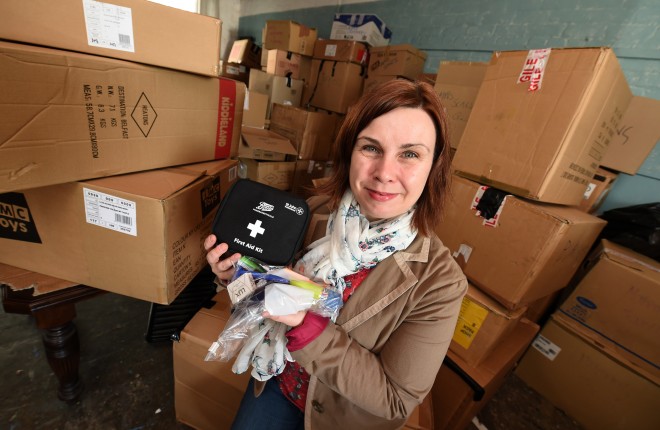 Roisin McAnulty, co-ordinator of the Fermanagh-Calais Refugee Solidarity group is delighted with the response they have had to their appeal. They have received hundreds of donations to date however they are still hoping for more first aid kits and basic items like toothbrushes and toothpaste.

THANKS TO THE compassion shown by local people public donations for the initiative aimed at helping provide aid to refugees across mainland Europe has reached all its targets.

Enniskillen woman Roisin McAnulty, who set up the Facebook group ‘Fermanagh – Calais. Refugee Solidarity Action’ just 13 days ago, has been overwhelmed by the public response, with a lorry load of supplies now ready to leave the county on September 26. She told the Herald that the campaign has gathered significant pace in the past week.

“We’ve had so many donations come into the Lakeland Forum that the room there is absolutely full and a lot more donations came into Henry Street (Dylan Quinn Dance Studio) at the weekend. And before everything came to a head I had privately organised donations with GAA centres, schools and the like so taking that all that into consideration I actually had to call off all public donations.

I had to make an executive decision and we’ve been doing that all over the island. The convoy is now full. So we’re now planning future convoys.”

Such has been the demand the group has received a large number of items which were not suitable to go on the convoy, but Roisin has confirmed no donations will go to waste.

“Contingency plans are being put in place so no items donated will go to waste. Either they will go to a future convoy, be used for refugees in Belfast or they’ll go to local charities.”

The convoy leaves Enniskillen on September 26 for Newry and will depart Rosslare harbour for Calais on October 1. All items that cannot fit on the lorry this time will go towards a second convoy being organised which will be going to the Syrian borders.

Reflecting on the local effort Roisin has been amazed at the response.

“It was monumental. My phone has not stopped ringing or buzzing with messages, they haven’t stopped coming in. We had a guy from Tempo Ruairi McKeagney, he came in with his jeep full of stuff from his shop already boxed; toothbrushes, first-aid kits, toothpaste, batteries, stuff that can be really used on the camps. Those are really priority items.

“The friends and neighbours of Fermanagh should congratulate themselves and give themselves a big pat on the back.”