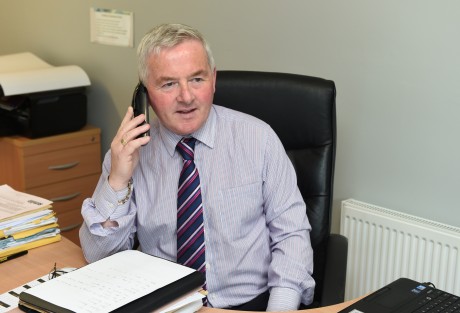 FERMANAGH and South Tyrone’s new SDLP candidate for next May’s Assembly elections, Richie McPhillips has vowed that the party won’t be walking away from the Executive “willy-nilly”.

The Lisnaskea businessman said that previous SDLP leaders invested in “too much” to walk away, after the Ulster Unionist Party voted to leave the Executive.

Mr McPhillips added that the current Stormont crisis is based on a big lack of trust between the parties and stated that until that is “levelled out” situations like these will “arise all the time”.

He was speaking a week after the SDLP selected the father-of-three to represent the party in next year’s Assembly elections.

The SDLP has always promoted equality and civil rights. But that’s not always the case for all of the parties.
“There’s been too much invested by our previous leaders and they have made a big commitment to peace in the 32 counties for people in the present SDLP to just walk away. Not at this stage.”

The native of Newtownbutler added that his aim is to regain the seat that was lost in the 2011 elections to Sinn Fein’s Phil Flanagan that was held by Tommy Gallagher for some 13 years.
“First and foremost we are going to have to get out vote out, there’s been a couple of elections from the 2011 assembly election, including the council election last year and if we can replicate the result there in terms of what the six SDLP councillors achieved in Fermanagh and South Tyrone area for first preference then we are well in the running to take the seat back.

“There’s six seats and we are aiming to take one of them for representation of the party in the consistency.
Tommy lost the election by a slim margin and a Sinn Fein candidate was successful. It could be that Sinn Fein will lose out.”
Turning to some of the issues facing the constituency, he said that Fermanagh has been a “neglected county” which has seen “very little investment”.

He added:
“It’s time now for the people of Fermanagh to get equality for jobs, health care, education and proper facilities all round. It’s long past the time where we are used to the poor relations and inward investment.
If you look at Invest NI or other public bodies there is nothing of significance coming here from them.

“Something I have said over the years is that Fermanagh, in particular, has been a neglected county. Over the years we have had very little investment, very little promoted inward investment and anything Fermanagh have they have worked hard to get and more than times than enough got themselves.”