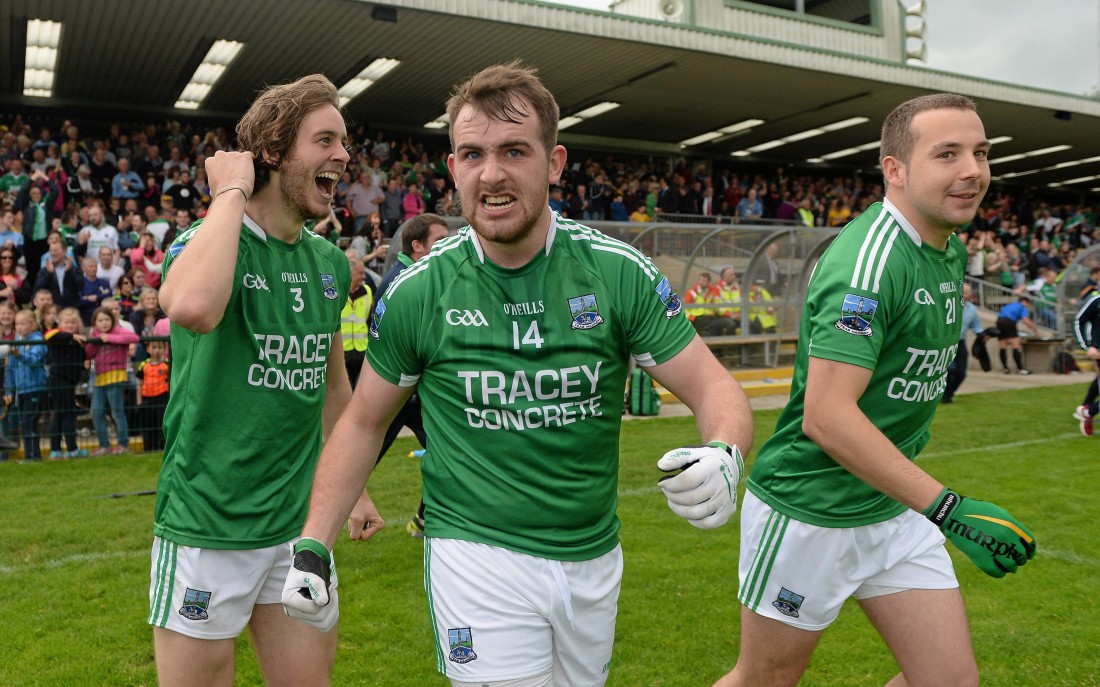 If a certain Danish brewer made championship Sunday afternoons, they’d probably look a lot like this.

The scenes of jubilation on the Brewster Park turf after Sean Quigley’s last gasp winner spoke more eloquently than any words.

The Ernesiders spent much of the afternoon rolling with the Rossie punches, but when the game was there to be won it was Fermanagh who showed that extra desire and no small amount of footballing class.

Fermanagh probed the Roscommon defences straight from the throw in, dropping a ball in on top of Sean Quigley. That was snuffed out with a minimum of fuss, indicative of the demeanor of the Rossie rearguard in the first half.

Scores weren’t easy come by, but Roscommon got theirs that bit easier than Fermanagh in the first half, rifling over two in the first two minutes thanks to Ultan Harney and Cathal Cregg.

Early evidence of the games physicality was further served when Neill Collins saw yellow after heavy tackle on Eoin Donnelly as he was going down for the ball.

Fermanagh’s first score came eight minutes in. Paul McCusker foraged bravely for the ball and fed it back to Niall Cassidy and he fired over a superb point.

The big hits were flying in again six minutes later, but this time it was Cathal Cregg who was able to steer over his second of the game.

A Donie Shine dead ball from 30 metres gave Roscommon a one goal cushion. However as the game edged into the second quarter Tomás Corrigan showed courage to go down and win the free 48 metres out. Sean Quigley stepped up and landed the most difficult free he had in the half. Unfortunately, he missed a further five chances in the first 35.

Roscommon’s response came from a placed ball. Seanie McDermott shot wide, but Cormac Reilly brought it back for a free close to the left flank sideline which Donie Shine converted.

With ten minutes left Ultan Harney was tripped as he went to shoot and again Shine was on hand to convert.

Then came three scores in 60 seconds. First Ciaran Murtagh claimed Thomas Treacy’s kick out and fed Cathal Cregg to loft over. Then Kevin Higgins broke down the kick out and it was collected by

Fermanagh finally won a kick out, thanks to Eoin Donnelly. He switched the point of attack to where Niall Cassidy was again raiding up and the Roslea man clipped over.

There was a let off with two minutes left in the half when an oblique Ultan Harney shot came glancing back off Treacy’s crossbar.

As the game moved into three minutes of first half added time there was time for two more scores.

First Tomás Corrigan landed a badly needed point from placed ball tothe right of the post. However then Ultan Harney worked hard for possession and Kevin Higgins collected his off-load and knocked over from 20 metres to make it Fermanagh 0-4 Roscommon 0-9 at the turn over.

Fermanagh needed a good start to the second half and Barry Mulrone delivered it, blasting over a trademark point from 40 metres.

However Roscommon remained in the ascendant and good running from Ronan Stack saw him draw the free and Ciaran Murtagh tap over the close range effort.

Three minutes into the half Fermanagh recycled well in front of the golden Rossie wall and Ruairí Corrigan was on hand to fire over a spectacular shot.

With 43 minutes on the clock there was a moment of real danger as Cathal Cregg tried to drive through on goal. He couldn’t make his was around the Coa mountain, Eoin Donnelly and a real goal threat was thwarted at the expense of a Ciaran Murtagh free.

The next score fell to the Rossies too, Enda Smith winning the Fermanagh kick out and feeding Cathal Cregg for the score. A handy free for Ciaran Murtagh after 47 minutes put seven points between the sides and the Connacht men in cruise control.

Fermanagh needed a score badly and James McMahon dogged out a possession and the men in green were able to work it through the hands to Tomás Corrigan who pointed well.

There seemed to be no staunching the flow of Roscommon scores as Ultan Harney got on the end of a sweeping Roscommon move to point from close range.

But then after 57 minutes came the turning point of the game. Niall Cassidy dropped the ball in and it was fielded by Marty O’Brien who was rapidly assisted to the deck. Sean Quigley grabbed the ball and after a Socrates stutter drilled the penalty hard to Darren O’Malley’s left to put just a goal between the teams, 1-8 to 0-14

As the game moved into its last ten minutes Roscommon showed no signs of being especially perturbed by the turn of events. Donal Smith bought a free with nine minutes to go and got Niall Cassidy black carded into the bargain before Donie Shine slotted a gift of a free.

Three minutes later Enda Smith let in an intelligent ball into Ultan Harney who smashed it over the bar for what was to be the Rossie’s last score of the game.

With five minutes left Fermanagh trailed by five points, but the comeback was on.

First Roscommon went loose in defence for a moment and Ryan Jones was able to capitalise with a nice point from play. Then Tomás Corrigan sent over a lovely placed ball.

Two minutes on Sean Quigley sent over a beautiful 45. The minimum in it with a minute left on the clock. There were two minutes of added time gone when Tomás Corrigan landed a stupendous sideline ball from under the Vesey Stand to level it.

But the drama didn’t end there. Fermanagh won the kick out, Richard O’Callaghan came on to the ball and let it in to Sean Quigley. The Roslea man made a majestic leap to field the ball of his life let swing with a shot of pure footballing instinct. The roar that rocked Brewster park told you all you needed to know about the kick as Fermanagh secured the sort of championship win that will be savoured down the ages.

The crowd that poured on to the pitch was there for almost 45 minutes after the game. We can be sure that wherever the tomorrow morning’s draw takes Ernesiders, the Fermanagh faithful will be there in their droves.

Fermanagh’s potential opponents in that draw which takes place live on Monday morning on RTÉ Radio 1 after the 8.30am news are Westmeath or the losing Munster finalists, Cork or Kerry.