Advertisement
HomeSportGAAFermanagh on their way to Croker after overpowering Westmeath
Advertisement 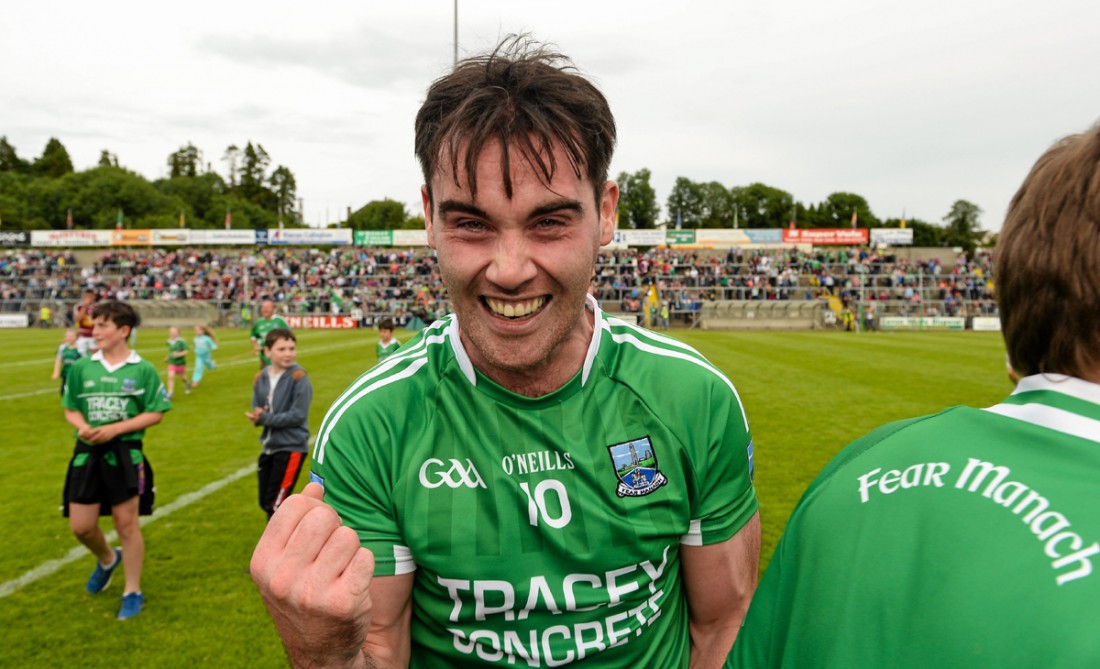 A muscular second half performance saw Fermanagh over-power Westmeath and book their place in the All-Ireland quarter-final against Dublin. Tomás Corrigan was the star of the show, a beautiful lob over substitute keeper Gary Connaughton putting the cherry on top of a five star display from the Kinawley man.

But for much of the first half it was Westmeath who dictated proceedings with Fermanagh finding it difficult to get into their rhythm.

They got under way early working a free to Shane Dempsey after a minute for him to pop over from 30 metres out on the left.

A minute later and Fermanagh were off the mark with a close range free from Sean Quigley.

After that though Westmeath took charge with their dominance in midfield proving a huge factor. Eoin Donnelly was taken out of the equation as the Lakelanders won seven kick outs against the head in the first half.

Westmeath took the lead after five minutes with John Connellan easing over a free from the arc of the dee.

Three minutes later Tomás Corrigan picked Declan McCusker out with a delightful pass and the Ederney man slipped it over a stylish shot to level matters again.

A feature of the first half was Fermanagh’s ragged shooting with 11 first half wides, including three uncharacteristic ones from the boot of Sean Quigley

Then as the game moved into the second quarter Fermanagh got a shock as a black card was brandished at Marty O’Brien for a drag down on Kieran Martin. John Connellan pointed the resultant free nonchalantly to restore the Leinster men’s lead.

Then, in an incident which called to mind the Derry Galway game, Fermanagh were denied a line ball that was correctly their’s, but Westmeath worked it to John Connellan who popped over to make it double scores.

With 11 minutes left in the half Killian Daly turned over the Fermanagh kick out for the second time in the half and again possession was worked to John Connellan for his second point from play.

The tide was decidedly in Westmeath’s favour, and it swung even further to them when Ryan McCluskey was black carded after reacting to a Westmeath challenge.

However, both black card subs, Damian Kelly and Ruairí Corrigan made positive impressions on their introduction and helped a late Fermanagh revival in the half.

It started with three minutes left to the interval. Sean Quigley roved deep to win possession and fed it to Tomás Corrigan who popped over from out on the left.

Two minutes on Barry Mulrone turned over the ball in his own defence and Fermanagh went through the phases to tee up Tomás Corrigan who drilled over a glorious point.

The a minute into first half added time Ruairí Corrigan did well to win a free in front of the post and brother Tomás obliged with the close range free to make it level score, five points a piece at the turn-over.

Fermanagh took the initiative three minutes into the second half, Tomás Corrigan with a fine free from 35 metres in front of the posts to put the Erne men in to the lead for the first time in the game.

Directly after though, there was real danger for Fermanagh as Denis Glennon advanced threateningly, but the Tyrrellspass man inexplicably opted to fist over when the goal was on. That was to be the last time Westmeath would trouble the score board operater for fully 29 minutes.

Fermanagh started the slow turn of the screw with 40 minutes gone, Sean Quigley hoisting over a gorgeous effort form play out on the left to restore the lead.

A minute later Ruairí Corrigan was dragged down as he went through on goal, but Padraig Hughes waved away the appeals for a penalty.

After 48 minutes there was a big score. Niall Cassidy raided up into some rare space in the Westmeath defence and sent over a real cracker to open a chink of daylight for Fermanagh for the first time.

Two minutes later there was elegant technique from Tomás Corrigan as he sneaked a right footed free inside the right post to put a goal between the sides.

With 52 minutes gone there was a reward for some serious hard work by Declan McCusker as he got on the end of a sweeping Fermanagh move to point.

Five minutes later and a towering free from Tomás Corrigan put five points in it as Westmeath started to wilt under the Fermanagh blows.

With six minutes left to play the coup de grace arrived. The ball went in and Richard O’Callaghan gave it a delicate little flick which beat the last Westmeath defender and put it into the path of Tomás Corrigan’s. Corrigan neatly lobbed Gary Connaughton for what was the clincher.

Ray Connellan responded shortly after with a close range free but by that stage it was too little too late.

Three minutes into added time Damian Kelly steered over the game’s last score unopposed to put the cap on a great Fermanagh performance. Victory to Pete McGrath’s side on scoreline of Fermanagh 1-13 Westmeath 0-7.

Now for Fermanagh there is just the small matter of an All-Ireland quarter-final on Sunday 2nd August against Dublin in Croke Park. Safe to say that quarter-final tickets will be like gold dust for the Ernesiders first outing in the last eight since 2004.