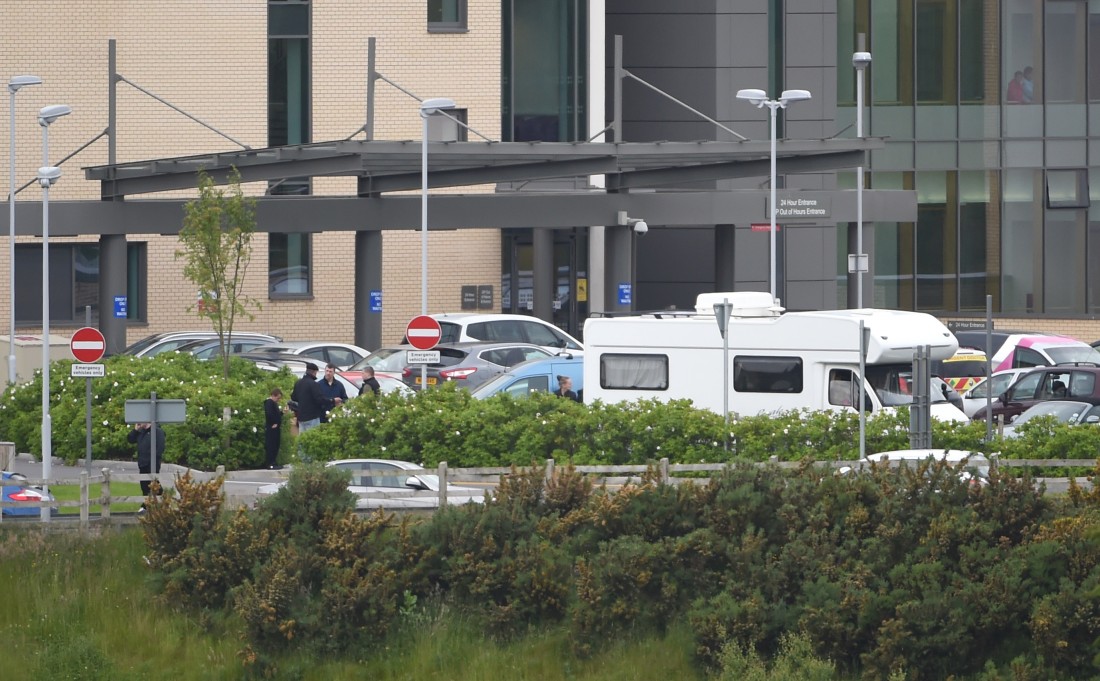 Travellers were congregated at the A&E entrance to the South West Acute Hospital towards the end of last week where another traveller died. The deceased’s remains were removed from the hospital last Friday evening at around 7.30pm

POLICE investigations are continuing following the report of major disturbances at the South West Acute Hospital at the end of last week.

Reports from staff indicate that a large group of people, understood to be members of the travelling community, urinated in lifts, drank alcohol and defecated on the toilet floors of the building over Thursday and Friday (June 11 and 12).

Police have confirmed that they were in attendance at the hospital and that investigations are continuing. The incidents are thought to have occurred after a man was admitted to the hospital, where he later died on Thursday, June 11.

A hospital source said: “Staff found it hard to look after patients as traveller the family took up their time. “There were incidents of lifts being used as toilets, children running about unsupervised annoying other patients and visitors, and the setting off of alarms.

“They had makeshift camp set up in A&E car park and it quite literally felt like an invasion.”

A police spokesman said that they were ‘made aware of incidents’ at the hospital on the Thursday.

He added: “We responded to a number of reports, including a report of a theft. Police recovered the property and investigations continue. A number of people were spoken to.”Police inspector Roy Robinson told the Fermanagh Herald that there were concerns raised by staff members.

He said: “There were a lot of people there. Police were called to make sure there was no untoward behaviour out of the crowd.

“We went there to reassure staff. I know there were concerns from the staff and it’s a beautiful building: It’s sad to see it treated in that fashion.

“I would say at the (A&E) car parking area, it was virtually all vehicles belonging to them and there were caravanettes there. There would have been as many as 50 or 60 at the time.”

Regarding the incidents of urinating and defecating, Inspector Robinson said:

“That’s what we’re led by staff to believe. They left the place in a bit of a mess. It’s very difficult to handle it.”A spokesman for the Western Health and Social Care Trust (Western Trust) said: “An incident occurred at the South West Acute Hospital on Friday 12 June.“The situation was managed by staff with the assistance from PSNI.”