THE CHAIRMAN of St Patrick’s GAA club in Donagh has issued a stark warning to young people using social media, after the club’s Facebook page was hacked on Monday night.

At around 9pm a professional virus was added to the page, with a pornography link attached.

Fergal Wray, the chairman of St Pat’s has highlighted the dangers of social media, in light of the attack and the tragic death of Coalisland schoolboy Ronan Hughes. The 17-year-old took his own life after being tricked into posting images online.

“We have always said it within the club how good a tool social media can be, but it has to be watched as well, it can’t be used for the wrong end of things.

“I suppose we don’t appreciate maybe as much as the younger generation, they’ve grown up with it, it’s just second nature to them and they can get  hit very easily by it.”

Mr Wray told the Herald that he was first alerted to the issue on the St Pat’s Facebook page at around 9.30pm. He received numerous calls regarding the virus, as indeed did other club committee members. The administrators were locked out of the page and local people were all tagged in the link to the pornography.

Mr Wray said the most worrying aspect of the incident was that young members were exposed to the explicit content. 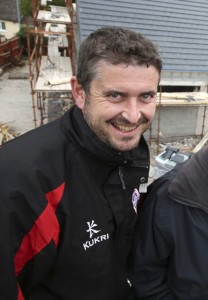 “It’s just disappointing, because there are so many kids involved in the club who use the Facebook page. The way it works with us is our team managers put up dates for training, upcoming events in the club, things like that, so it was very disappointing and just unfortunate there was nothing we could do about it.”

The chairman said the virus problem was widespread on Facebook and the club has since taken steps to ensure the issue doesn’t arise again.

“I saw a warning last night about it, just advising people to change their passwords as much as they can, that sort of thing, so there are a few steps in place to try to prevent this happening again.”

He continued: “We’re going to be trying to tell all our members if they are posting a link to our website or accessing our page to be very careful. We just don’t know where this came out of. Whether it’s been through a link that has been shared or someone has hacked our account, but most likely the latter, that’s why we’ve changed our passwords.”

The page is now back up and running and the club have contacted Facebook, but have yet to receive a response.

Fermanagh GAA PRO Pauric McGurn said that Twitter and Facebook posts must be censored and stated that anything said out of context can land clubs, counties and players in serious trouble.

“GAA sport sites need to remember to develop themselves, protect their reputation, moderate discussions appropriately and to provide a voice for their many fans,” said Mr McGurn.