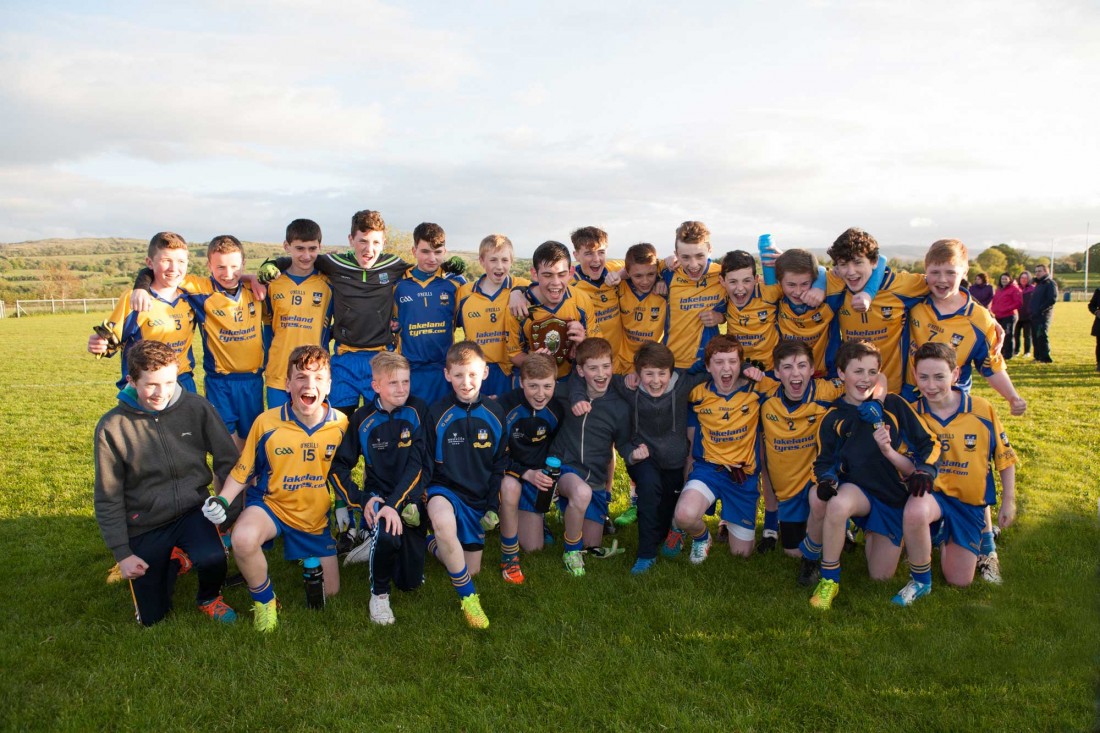 Enniskillen captured the division 1 league title against a hard working Derrygonnelly side in Belcoo on Tuesday evening.

Coming into the game both sides were quietly confident that they could capture the crown having already won one apiece in the Féile competition and the division 1 league games.

Derrygonnelly started well and pointed through Darragh Burke, while Enniskillen Gaels attacker Caoilte Hamill pointed in return for the County town side. Derrygonnelly then pushed 0-2 to 0-1 ahead when Conor McGovern did well to move in from the flank and smash over a fine individual point.

Enniskillen hit a real purple patch with six points in a row from Conor Love (4), Ferghal Quinn and Caoilte Hamill as they swept into a 0-7 to 0-2 lead after 20 minutes.

Derrygonnelly were finding it hard to break down the Gaels defence, while Enniskillen seemed to have that extra bit of panache up front. But it was Derrygonnelly who struck for the first goal of the game in the 25th minute, Rian McGovern beating two Enniskillen defenders and driving a low shot into the net to put Derrygonnelly right back into the tie, 1-2 to 0-7.

Enniskillen hit back immediately with a fine individual goal by full forward Conor Love who was excellent throughout the game. Love’s goal pushed Enniskillen back into a five point lead but just before the half-time whistle Derrygonnelly’s Micheal Glynn pointed from the right to make it 1-7 to 1-3 in favour of Enniskillen at half time.

Enniskillen raced into a six point lead with just under two minutes of the second half gone through points from Josh Horan. Then three minutes later Caoilte Hamill worked his magic to find the net as Enniskillen raced 2-9 to 1-3 ahead.

Conor Love then added another point as Enniskillen looked well primed to push on, but Derrygonnelly rolled their sleeves up and came into the game mid-way through the half.

Rian McGovern tucked away a penalty in the 38th minute and when the same player scored two well struck points in the 45th and 47th minute a Derrygonnelly comeback looked like it might be on the cards.

Cian Corrigan then tucked away a sweeping ball in from Darragh Burke and all of a sudden Enniskillen’s lead was cut down to just two points, 2-10 to 3-5.

Enniskillen finished the stronger though and through the excellent Conor Love and James O’Donnell they wrapped the game up with some eye catching scores although Derrygonnelly did try right up to the final whistle.

Best for Enniskillen on the night were Jack Tierney and Josh Horan, while Conor Love and Ferghal Quinn were both superb.

Derrygonnely were best served by the excellent Rian McGovern and Ronan McHugh, while Micheal Glynn and Darragh Burke got through plenty of work.